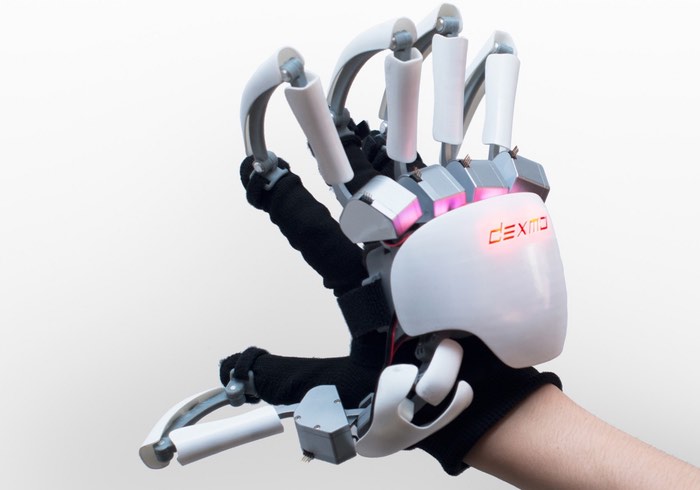 One major issue which has not been resolved within virtual reality worlds at the current time, is the ability to physically touch digital objects in a way that is more intuitive to real-life. Dexta Robotics is looking to change this and has designed a wearable virtual reality exoskeleton glove that allows you to physically touch in a digital world.

Watch the demonstration video below to learn more about the VR gloves which have been designed to provide the ability for users to physically touch digital objects whilst immersed in a VR application or game.

Dexta Robotics explain more about the development process of the new VR exoskeleton :

In the past two years we have made over 20 iterations of Dexmo and tested numerous force feedback methods. These valuable experiences helped us build a better human-machine-interaction tool. Dexmo captures full range of your hand motion and provides force feedback. With it you can feel the size, shape and stiffness of virtual objects.

Variable Stiffness Force Feedback – The force feedback ability allows the user to feel the size and shape of any digital object, which greatly improves immersion. Variable stiffness is achieved by precise motor control. With this feature, each virtual object can have their own stiffness.

For more information on the new VR gloves jump over to the Dexta Robotics website for details by following the link below.