A new desktop DLP Solidator 3D printer has been created that has been designed to provide users with a larger than standard print area as well as the ability to print quicker models using DLP-Stereolithography and specially formulated materials.

The Solidator 3D printer has been created to harden an entire 0.1 mm layer all at once, without the typical moving heads or lasers that do nothing except waste your precious time. This makes Solidator the fastest liquid plastic resin printer around, without sacrificing quality. Watch the video after the jump to see it in action. 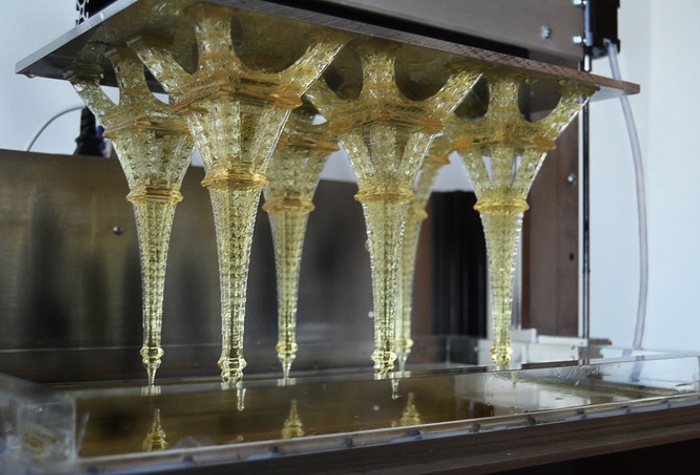 “The Solidator 3D printer features a huge build area that is 3-4 times larger than that of most other commercial stereolithography printers and even a lot higher than those of the most FDM printers. No longer will you be limited to small prints – the 588cm² print area yields objects that are truly massive by comparison. The Solidator 3D printer can print features as small as 270 microns (0.0106 inches) and layer heights from 100 microns all the way down to 30 microns. This leads to impressive results.

We are saving you time and providing really high resolution prints on a huge build platform. We think that if you want to print a robot, RC car, engineering parts, electronics enclosure you will need a massive 280x210x200mm – 11.8 liter build volume or you just want to save time by printing several objects at once, you need a Solidator!

Solidator can for example print a Raspberry Pi Cover Top, a Raspberry Pi Cover Bottom and a complete chess set in only 25 minutes all in one print. In fact Solidator can – at 100 micron layer height – render more than 1.5 Billion Voxels over a massive 11.8 liter build volume in only 5.5 hours making it the fastest Desktop 3D Printer on the planet with a really high resolution and a fixed XY positioning accuracy and a tiny minimal feature size.”