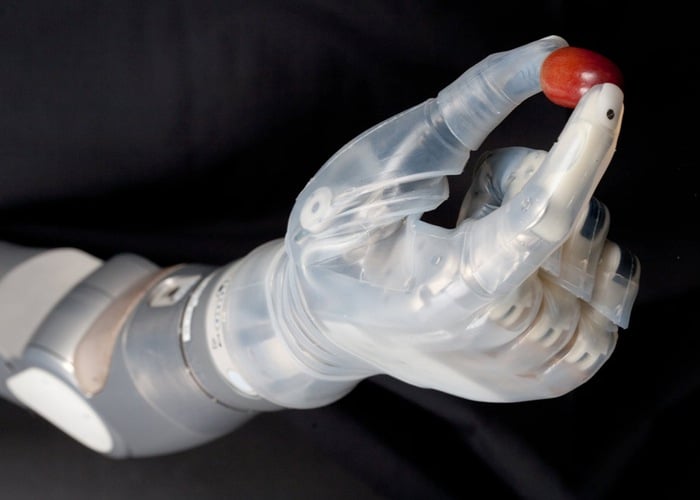 Earlier this month the US Food and Drug Administration (FDA) approved a mind controlled prosthetic arm that has been developed by DEKA Integrated Solutions for DARPA’s Revolutionising Prosthetics program.

The DEKA mind controlled prosthetic arm also referred to as the “Luke” arm, referencing the prosthetic arm that was worn by Luke Skywalker in Star Wars. Is controlled by electrical signals from electromyogram (EMG) electrodes connected to the wearer’s muscles. Watch the video after the jump to see it in action.

The electrodes connected to the users muscles transmit signals to a processor in the prosthesis arm, turning them into ten distinct movements. Unfortunately the Deka mind controlled prosthetic arm does not function for those with patients with limb loss at the elbow or wrist joint.

Now that the mind controlled prosthetic arm has FDA approval the arm can move from a research experiment in to full-fledged commercial product. Christy Foreman, the director of the Office of Device Evaluation at the FDA’s Center for Devices and Radiological Health in a statement :

“The Deka Arm System may allow some people to perform more complex tasks than they can with current prostheses in a way that more closely resembles the natural motion of the arm,”

For more information on the new mind controlled prosthetic arm jump over to the DEKA website for details.