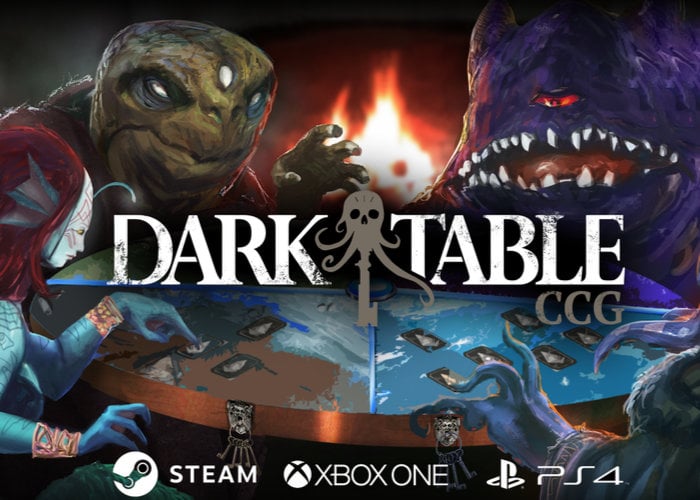 Kyle Klouda has returned to Kickstarter this month to launch a new deck building game happily named Dark Table. Reimagining multiplayer card gaming, the four player game is now available via Kickstarter with early bird pledges available from just $10. If all goes to plan worldwide shipping is expected to take place during December 2021 watch the demonstration video below to learn more about the game and its mechanics. Once finished Dark Table will be available to play on the Xbox One, PlayStation 4 and PC via Steam.

“Dark Table CCG is more than just a card game. It is multiplayer card gaming re-imagined: Free-to-play, online 4-player, unrivaled instant deck-building, and a focus on social atmosphere and table politics. Set in a grim Lovecraftian theme, Dark Table brings a unique strategic experience with up to 4 players battling in a free-for-all, using temporary alliances and mutual interest to get ahead. Select your leader and build your deck around it to survive the onslaught and claim your world.”

“In Dark Table your health for a game is dictated by the leader you choose. Each leader has different amounts of health based on its rarity, enrage ability, and enrage cost. Leaders with low enrage cost will typically have lower health, so carefully craft your deck around your leader. Each leader has specific “Enrage Abilities” that significantly affect the game once triggered. Enrage Abilities have different trigger types such as Knowledge Level, Berserk, and Bloodshed.”

“Knowledge Enrage Abilities required a certain level of knowledge be obtained in a game before the leader unlocks. For this type of leader, all knowledge points not used at the end of the battle phase goes into your knowledge pool toward the trigger. Knowledge Enrages usually have to stall the longest to get an Enrage.”