If you’re a big fan of the EA and Crytek franchise Crysis you’ll get a thrill out of this even though the images are tiny and hardly gives anything away. If you bought an EA game lately, you probably have Origin running on your computer. 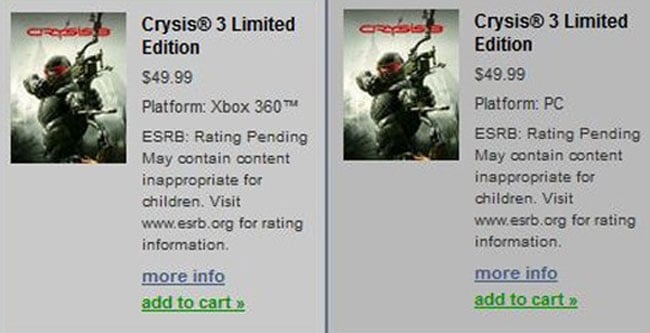 Origin was the source of the leak today that unveiled what appears to be a box shot for Crysis 3. The little image showed up on Origin for Crysis 3 Limited Edition for the Xbox 360 and for PC gamers. The ad showed the game would sell for $49.99.

The tiny little picture shows the main Crysis suited dude using what appears to be some sort of bow. The background appears to show buildings making me think this will be set in an urban environment. The game is expected to be unveiled next week so we don’t have long to wait for more details.