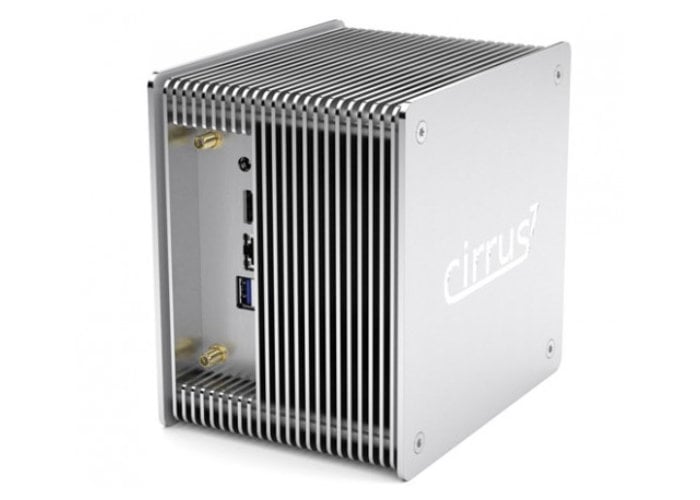 The first passively cooled Coffee Lake NUC or Bean Canyon small-form-factor mini PC has been introduced this week by Cirrus7 complete with its new redesigned nimbini chassis. Which allows it to run at least 12° cooler than in Intel’s stock case. Idle temperatures measurements after running the mini PC for 60 minutes running the Ubuntu 18.04 Desktop was just 27° C. Cirrus7 explains more about the testing :

This is a clear win but was to be expected as the NUC draws very little power (3-5W) idling. The idle temperature with the NUC is fluctuating because with standard BIOS settings the fan kicks in at 40°C and stops again at < 30°C. Even when idling the fan starts spinning from time to time to keep idle temps below 40 °C.

Second contest: prime95 torture. Now the fun part begins. As you can see on the diagram below:

– Intel NUC8i7BEH: maxing out after about 8 minutes with 80 °C. Fan is now blowing like a hair dryer. Average clock speed on all cores with prime95 load is 2.973GHz
– cirrus7 nimbini v2.5: maxing out at 68 °C steady state temperature. Temperature is also rising much more gradually. Of course without any noise emitted ;-). Average clock rate is slightly higher than stock cooling: 3.011GHz.

“Our main goal was to be as good or even better than the original fan-cooled intel NUC in terms of cooling performance. Looking at the stock intel NUC8i7BEH there are two parameters which can affect the CPU temperature under a given load. First is the fan speed – of course – but secondly, if fan speed can’t be adjusted any higher the CPU clock is also adjusted. That does not necessarily mean that the CPU is throttling. Intel Turbo Boost is trying to keep the CPU clock high as long as cooling can handle and as long as the system does not draw more power than specified in BIOS settings. “

For more details jump over to the Cirrus7 blog post by following the links below.