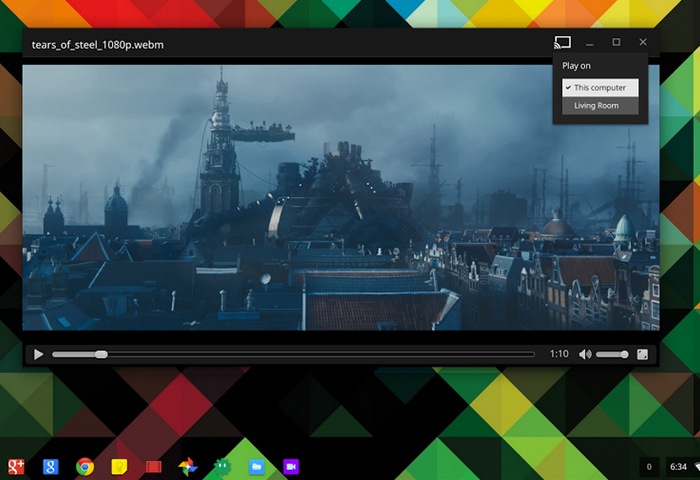 Chromebook owners that have been waiting for Google to add support for them to be able to stream videos stored within their Google Drive cloud storage facilities, will be pleased to know that it has now finally arrived.

Google has this week released a new Chrome OS dev update which has provided a new version of the player application. Once the Google Cast extension is installed on your Chromebook you can then open files and play movies uploaded to your Google Driver count.

The latest update now enables you to send your streaming movies directly to your HDTV using the Google Chromecast dongle that can be plugged into a spare HDMI connection on your HDTV. Google’s François Beaufort explains :

“We can now cast our favorite movies stored in Google Drive directly from the Video Player App to a ChromeCast in the last Dev Update of Chrome OS. Go give it a try! Open the Files App, select the Drive section, play a movie and notice the new ChromeCast icon in the Video Player App player. If you don’t see it, that means you may not have installed or enabled the Google Cast Extension².

The Google Cast extension enables you to find and play content on your Chromecast device from your Chrome browser. When on Cast optimized sites like YouTube and Netflix, you’ll see new options that let you play video on your TV via Chromecast – using your computer as a remote to browse for videos and to control playback.

You can also cast any of your tabs in Chrome to your TV, letting you enjoy sites, photos, or even video from the best screen in your home. Note that this feature is still in beta, and requires a fast computer and Wi-Fi network.”

For more information on updating your Chromebook to the latest development version of Google’s Chrome OS jump over to the official website here to learn how.