Chevrolet has offered up details on a really cool feature that will be available when regular production kicks off later this year for the 2015 Corvette Stingray. GM made the announcement at CES 2014. The 2015 Stingray will get what GM called the Corvette Performance Data Recorder or PDR. The PDR is a video recording system that can overlay telemetry data while on the racetrack. 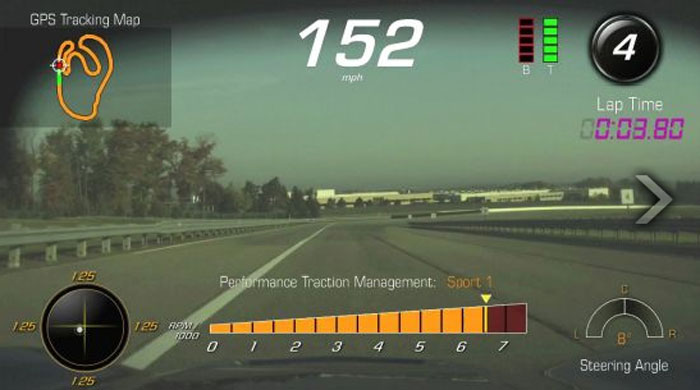 The PDR system was developed in cooperation with Cosworth, which is the firm that provides GM’s racing telemetry systems for Corvette Racing. The system will be available later in the year with pricing announced closer to launch. The system includes a 720p resolution video camera in the windshield header.

The camera records video from the drivers POV. The system also has a mic in the cabin to pick up audio. The telemetry recorder is hard wired into the car allowing it to add an overlay to video with RPM, lap time, speed, gear selected, g-forces and more. The video and telemetry data is stored to a SD card located in the glove box of the car. The video can be reviewed on the in-dash touchscreen when the car is parked.