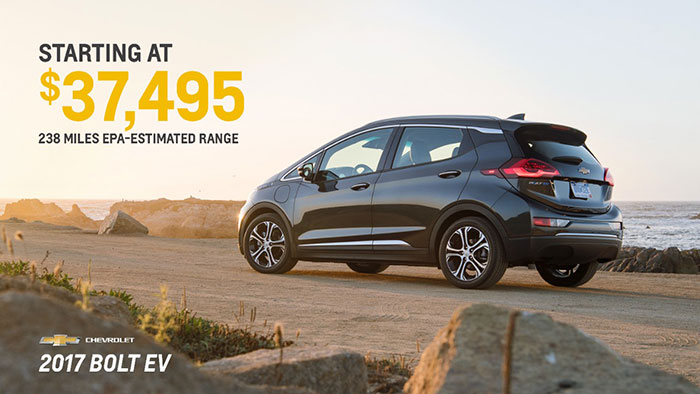 Chevrolet has made good on all its promises so far with the new Bolt EV. It promised at least a 200-mile driving range per charge and was given an EPA-estimated driving range of 238 miles per charge. Chevy also promised that the car would be affordable and has officially announced the MSRP for the car.

The base LT trim will start at $37,495 before the $7,500 federal tax credit many buyers will be eligible for. After that federal tax credit is applied, the car will cost $29,995. For the money, the Bolt LT comes with Regen on Demand steering wheel paddle, rear vision camera, 10.2-inch touchscreen, and self-sealing tires. The top of the line Premier includes that same gear and adds leather seats, front and rear heated seats, surround camera and rear camera mirror.

The MSRP includes destination charges, but not taxes. Chevy still plans to have the Bolt EV in select dealerships in late 2016. It’s not clear what parts of the country will see availability. Often EVs start in only a few select states, but we don’t know that for sure about the Bolt EV right now.