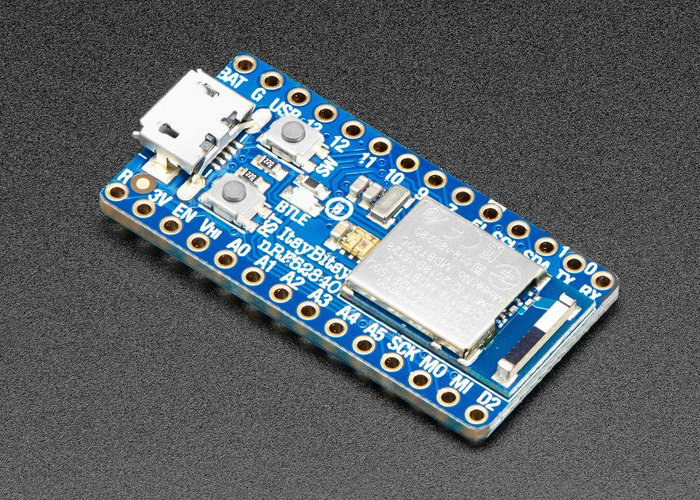 “This microcontroller board is perfect when you want something very compact, with a heap-load of memory and Bluetooth LE support This Itsy is your best option for tiny wireless connectivity – it can act as both a BLE central and peripheral, with support in both Arduino and CircuitPython ItsyBitsy nRF52840 Express is only 1.4″ long by 0.7″ wide, but has 6 power pins, 21 digital GPIO pins (6 of which can be analog in). It’s the same chip as the Feather nRF52840 but really really small. So it’s great for thse really compact builds. It even comes with 2MB of QSPI Flash built in, for data logging, file storage, or CircuitPython code.”

“The most exciting part of the ItsyBitsy is that while we ship it with an Arduino IDE compatible demo, you can also install CircuitPython on board with only a few clicks. When you plug it in, it will show up as a very small disk drive with code.py on it. Edit code.py with your favorite text editor to build your wireless-enabled project using Python, the most popular programming language. No installs, IDE or compiler needed, so you can use it on any computer, even ChromeBooks or computers you can’t install software on. When you’re done, unplug the Itsy’ and your code will go with you.”

Features of the ItsyBitsy nRF52840 Express Bluetooth LE include :

– Same size, form-factor as the remaining ItsyBitsy mainboards – with a similar but not identical pinout (there’s no pins at the end of the board like most other Itsy’s due to the radio antenna being there.
– Floating point support with Cortex M4 DSP instructions
– 32-bit, 3.3V logic and power with power/enable pin
– 1024 KB flash, 256 KB RAM
– 2 MB QSPI FLASH chip for storing files and CircuitPython code storage.
– Native Open Source USB stack – pre-programmed with UF2 bootloader
– Bluetooth Low Energy compatible 2.4GHz radio (Details available in the nRF52840 product specification)
– FCC / IC / TELEC certified module
– Up to +8dBm output power
– 21 GPIO, 6 x 12-bit ADC pins, up to 12 PWM outputs (3 PWM modules with 4 outputs each)
– Red LED for general purpose blinking, mini DotStar RGB LED for colorful feedback
– 1 x Special Vhigh output pin gives you the higher voltage from VBAT or VUSB, for driving NeoPixels, servos, and other 5V-logic devices. Digital 5 level-shifted output for high-voltage logic level output.
– Native USB supported by every OS – can be used in Arduino or CircuitPython as USB serial console, Keyboard/Mouse HID, even a little disk drive for storing Python scripts.
– Can be used with Arduino IDE or CircuitPython
– Comes pre-loaded with the UF2 bootloader, which looks like a USB storage key. Simply drag firmware on to program, no special tools or drivers needed! It can be used to load up CircuitPython or Arduino IDE