A new update has been added by the BBC to their iPlayer iOS application which will allow users to download content to smartphone and tablets, which can then be watched offline.

From today UK licence-fee payers will have the opportunity to download BBC programmes from within the iPlayer video-on-demand application, and watch them on Apple iPhone, iPad and iPod, at no extra cost. 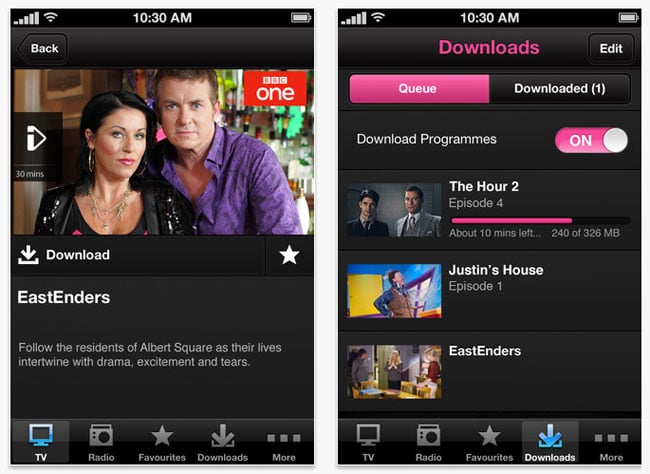 Downloaded iPlayer programmes will be available to watch for unto 30 days, or within 7 days after watching has started. With 50 hours of standard definition media fitting in 16GB of storage space, or 25 of high definition. Daniel Danker, the BBC’s general manager of on-demand programmes, explained more about the new iPlayer feature:

“This fundamentally changes one of the most annoying restrictions about viewing programmes. It means audiences are liberated from the constraints [of online-only viewing] and it fundamentally changes what it means to go on holiday.”- “With mobile downloads, you can now load up your mobile phone or tablet with hours and hours of BBC programmes, then watch them on the road, on the tube, on a plane, without worrying about having an internet connection or running up a mobile data bill.”

The BBC is also looking to roll out the new offline viewing features to its Android iPlayer app for smartphones and tablets in the near future, but at the present time hasn’t announced any firm dates for its roll out.