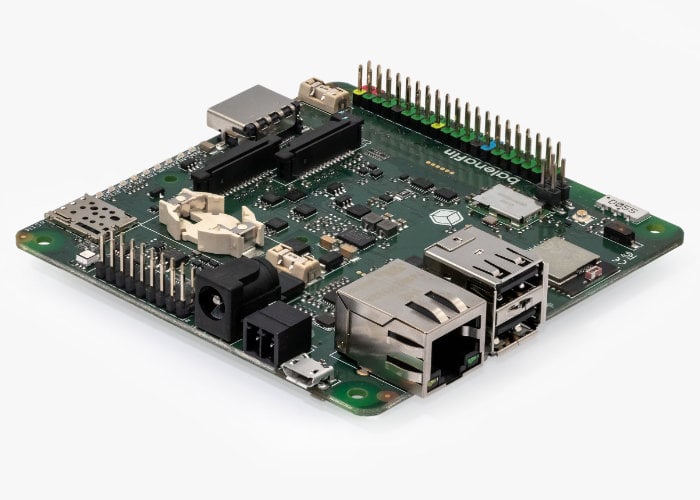 A new Raspberry Pi module expansion board has been unveiled by Balena in the form of the balenaFin v1.1 which is now available to order and features dual camera support, PoE and more. Priced from $179 for the first 100 v1.1 developer kits publicly available or $129 for the  standalone balenaFin board. The balenaFin v1.1 carrier board  has been specifically designed for the Raspberry Pi Compute Module 3 and 3+ hardware. 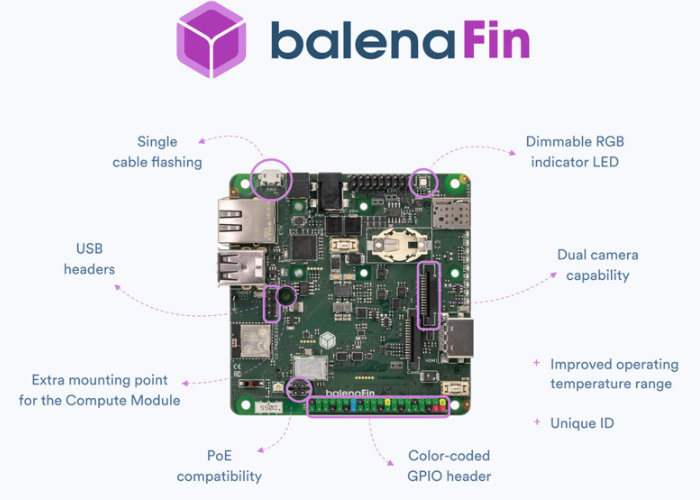 Main features of the balenaFin v1.1 include :
– The on-board coprocessor, which is a microcontroller that has its own Bluetooth radio and can operate without the CM3/3+ being powered on. This enables balenaFin to perform well in real-time and low-power scenarios. The CM3/3+, along with its interfaces, can be programmatically shut down, powered off and powered back up again via the microcontroller. The microcontroller also has access to the real-time-clock (RTC) chip even when the CM3 is off, allowing for time-based operations. Inputs and outputs of the coprocessor, along with I2C and SPI, are brought out to their own header.
– The mini PCI-express slot (mPCIe), which can be used to connect peripherals such as cellular modems and LoRa modules. Complimenting the mPCIe slot, balenaFin also has a SIM card slot to make adding a modem even easier. 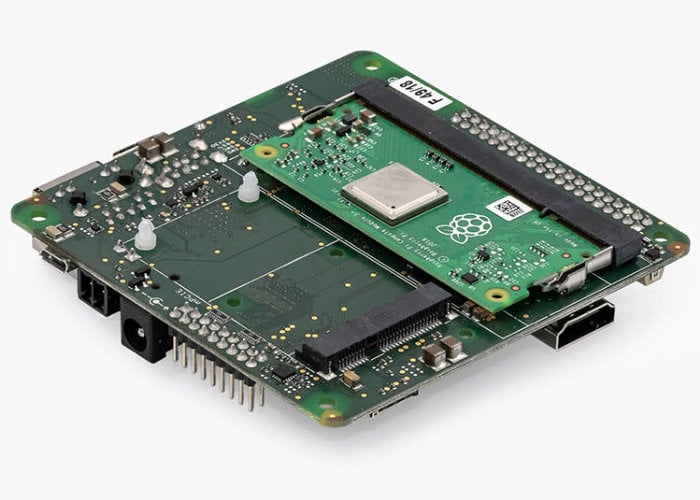 “It’s a carrier board for the Raspberry Pi Compute Module 3 and 3+ (CM3/3+) Lite, which means balenaFin can run all of the software that the Raspberry Pi can run, whilst being hardened for field deployment and adding some of the features we’ve seen our users needing the most. The balenaFin includes 8/16/32/64 GB of on-board eMMC depending on the model, has dual-band connectivity for both 2.4 and 5GHz WiFi networks, can be connected to an external antenna for WiFi and Bluetooth, and can accept a wide range of DC power input via either the barrel jack or 2-position phoenix connector.”
Additional features of the balenaFin v1.1 Raspberry Pi module board include :
– Dual camera capability The DSI connector on the balenaFin has dual functionality. It can act as a camera port or as a display port, allowing for stereoscopic camera functionality
– PoE compatibility (802.3af) balenaFin is now PoE compatible via a HAT (not included)
– USB headers An additional USB port exposed through headers. This can be leveraged by custom balenaFin HATs for extended functionality
– Single cable flashing The micro-USB debug port can power the balenaFin for flashing with a single cable, which previously required a full power supply. Note: the debug port can’t be used for powering the device in operation
– Improved operating temperature range We’ve extended the temperature range from -20°C to +70°C for use in a wider range of environments.
– Dimmable RGB indicator LED The board now includes a dimmable RGB indicator LED.
– Color-coded GPIO header The 40-pin GPIO header is now color-coded to assist with prototyping and connection of peripherals.
– Extra mounting point for the Compute Module We have improved vibration resistance with the addition of extra mounting points for the Raspberry Pi compute module. (CM3/CM3+).
– Unique ID Each unit now has a uniquely identifiable data matrix printed on the board.
For more details and full specifications jump over to the official Balena website by following the link below.