The Jurassic Park Lego Set kit created by Cuusoo user Senteosan has already clocked up over 2,500 points to becoming an official Lego set with a target of 10,000 supporters require to make the jump to production. 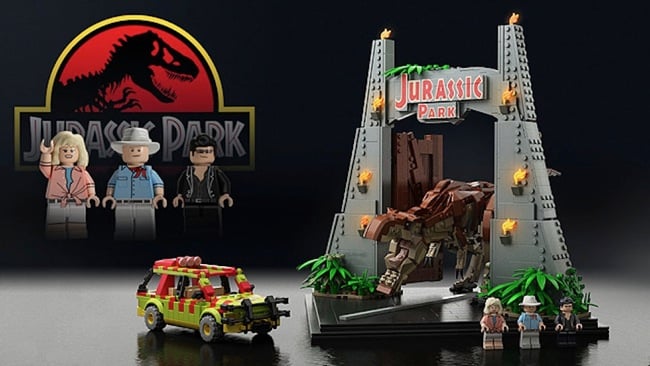 The original Jurassic Park film was released back in 1993 and has taken $1,004,553,882 in box office sales since launch. The creator of the  Jurassic Park Lego Set explains :

“I got this idea right before 3D version of first film hit theaters on April 2013 and since then I’ve been working on this project. I used a tremendous amount of time drafting models again and again, making sure that all propositions are right and each component looking as realistic as possible. I have always thought this as a display piece, like UCS -style eye catcher but there certainly is a lot play value here too.

Please note that pictures shown here at the moment are 3d renders as I’m still waiting real pieces to arrive so I can actually build it. I have created all models using LDD and tested that they are buildable and rigid enough – at some point I could share those LDD files with you. I’m still adding new pictures almost every day so keep checking back regularly for updates. See you soon!”

To help the Jurassic Park Lego Set become reality jump over to the Cuusoo Lego website to pledge your support for the new kit.