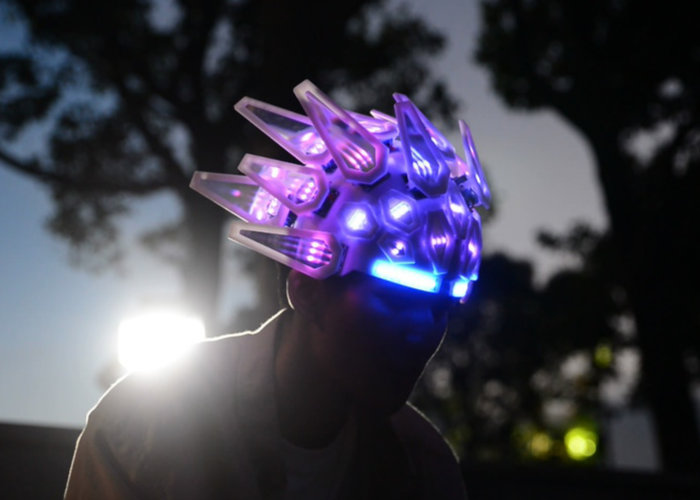 Cyclists will already know the dangers of being not being seen at night by pedestrians and vehicles on the road. If you could do with a little extra illumination at night or in dark places you might be interested in the Automaton LED helmet created by the Los Angeles-based design team at 10KLumen. Failing that the LED helmet is a great accessory for your next party.

Equipped with a massive 135 LED lights and 15 customised servos the awesome Automaton LED helmet will definitely help you get seen at night. Watch the demonstration video below to learn more about its design and awesome functionality. The team at 10KLumen explain more about the inspiration behind the LED helmet.

“Last year when we first saw Jamiroquai’s Automaton video, we were immediately impressed by the helmet that Jay Kay wears in the video. A lot of people asked if we can make a replica. After an assessment, we decided to make the replica. Although we only had a video as a reference after long months of excruciating research and development (We designed the circuit boards on the helmet and the battery pack, developed a customized app, added RF remote system and got molds done) we were able to build a functional helmet with relatively low cost. “ Check out the Jamiroquai video which inspired the Automaton LED helmet.

The LED helmet is now available to back fire Kickstarter with earlybird pledges available from $325 and worldwide shipping expected to take place during March 2019.