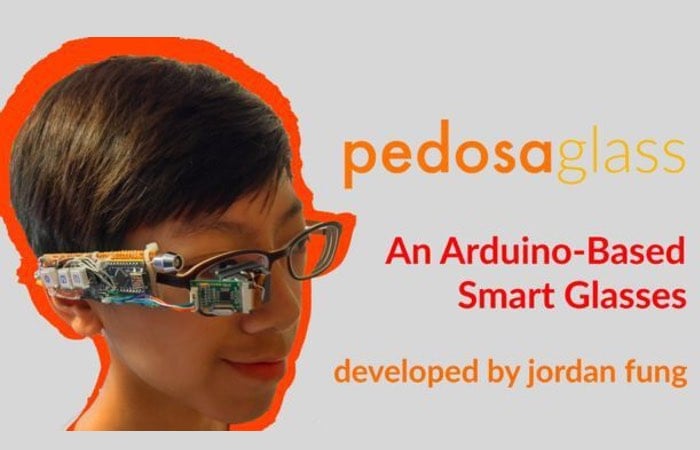 Over on the Instructables website an awesome pair of smart glasses that are Arduino-based have been featured, that have been developed by Jordan Fung a 13-year-old developer and maker.

The smart glasses have been constructed using an Arduino Nano development board which is equipped with a FLCOS display together with three buttons and an LED indicator that can also be used a flashlight.

The smart glasses system runs a custom operating system that has been developed by Jordan who explains a little more about the project and his skills.

I am Jordan Fung, a 13-year-old student from Hong Kong. I have been developing Android and iOS apps, and I’ve developed 6 apps (available on the Google Play store and iTunes App Store). In addition, I have also been doing Arduino programming and prototyping. In this Instructable, I am going to introduce you to my latest project, the coolest project I’ve ever made – an Arduino-Based Smart Glasses – the Pedosa Glass!

Check out the video below to learn more about the awesome hardware that Jordan has created.

For full instructions on how to build your very own Arduino-based smart glasses jump over to the Instructables for a full list of everything you need and detailed directions on how to construct it via the link below. If you making Arduino projects you may enjoy building your very own Arduino wind speed meter that requires just basic Arduino skills.