AVADirect has a number of fast notebook is in its line, but they all pale in comparison to its latest offering called the X7200. The new X7200 is hailed as the fastest desktop replacement notebook on the planet by AVADirect. The machine has some awesome specs indeed.

It has an aluminum skin with available dual NVIDIA GTX 480M GPUs in SLI mode. Those GPUs have a total of 4GB of GDDR5 RAM when paired. The machine can also be fitted with up to 12GB of triple channel DDR3 RAM. It has three 9.5mm storage slots inside and an onboard RAID controller. 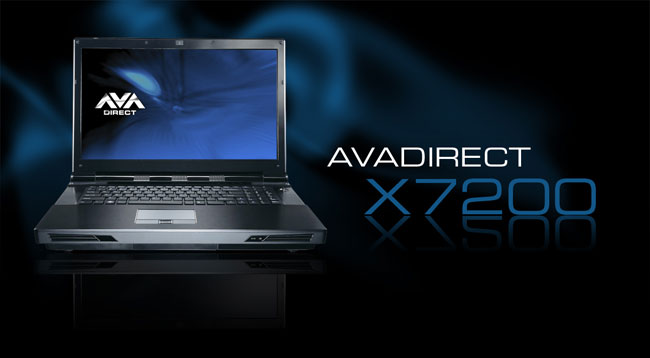 Those three slots allow for up to 2TB of HDD storage or 1TB of SSD storage. A workstation version will also be coming soon with 6-core Xeon processors and up to 24GB of RAM with dual Quadro 5000M GPUs. A base X7200 with 3GB of RAM, a quad-core CPU, and a single GTX 480M will sell for $2700. Fully optioned machines will cost much more than that amount.