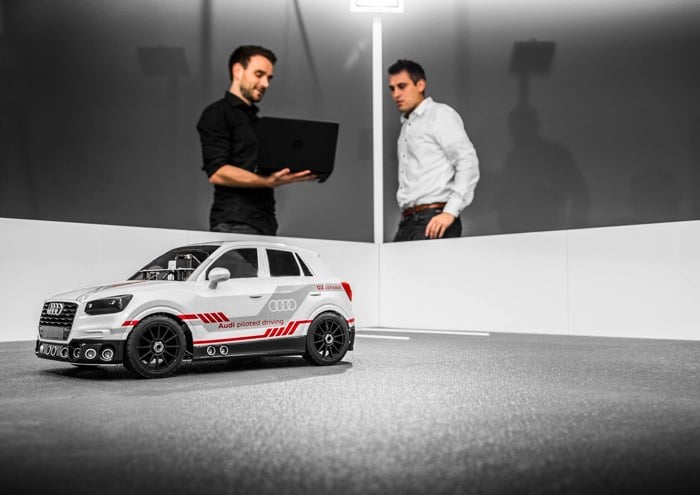 A number of companies have shown off their Self Driving technology and Audi has been using a toy car to train its self driving software.

The company has released a video which show a 1/8th scale car which is being used to test out the features of its Self Driving software.

Self-learning systems are a key technology for piloted driving cars. That’s why Audi has already built up a wealth of know-how in machine learning. The company is the only automaker represented at NIPS with its own stand and a showcase. A 1:8 scale model car – the “Audi Q2 deep learning concept” – is demonstrating an intelligent parking process. On an area measuring 3 x 3 meters, it autonomously searches for and finds a suitable parking space in the form of a metal frame, and then parks itself there.

The Audi Q2 deep learning concept’s sensor technology consists of two mono cameras, facing forward and toward the rear, along with ten ultrasonic sensors positioned at points all around the model. A central on-board computer converts their data into control signals for steering and the electric motor. On the driving surface, the model car first determines its position relative to the parking space. As soon as it perceives the position, it calculates how it can safely drive to its targeted destination. The model car maneuvers, steers and drives forward or in reverse, depending on the situation.

You can find out more details about Audi’s plans for Self Driving cars over at the company’s website at the link below.