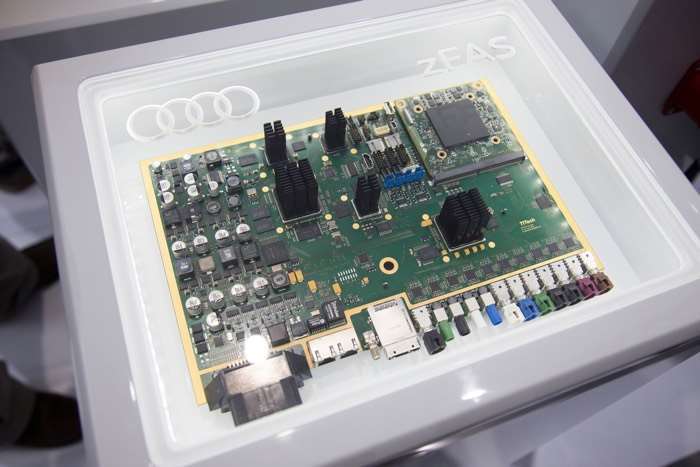 Audi has been working on self driving cars for a while and now the company has announced that it has teamed up with NVIDIA.

Audi is showing off a Q7 deep learning concept at CES in las Vegasand the vehicle uses the NVIDIA Drive PX 2.

In conjunction with the CES keynote address by NVIDIA, Audi is demonstrating the intelligence of the Q7 deep learning concept on a specially designed, variable open area for piloted driving. The car orients itself by means of a front camera with 2 megapixel resolution, and the camera communicates with an NVIDIA Drive PX 2 processing unit, which in turn controls the steering with high precision. The high-performance controller is specially engineered for piloted driving applications.

Serving as the core of the software are deep neural networks that experts from Audi and NVIDIA have trained specifically for autonomous driving and recognition of dynamic traffic control signals. Beginning with a human driver at the wheel, the Audi Q7 deep learning concept gained a limited familiarity with the route and the surroundings, by means of observation and with the help of additional training cameras. That established a correlation between the driver’s reactions and the occurrences detected by the cameras. So during the subsequent demonstration drives the car is able to understand instructions, like from a temporary traffic signal, interpret them right away and act as the situation requires. When a corresponding signal appears, the concept car immediately changes the driving strategy and selects either the short route or the long one. The design of the system is so robust that it can even cope with disturbance variables such as changing weather and light conditions. It masters its tasks day and night, and even in direct sunlight or harsh artificial light.

You can find out more information about the partnership between Audi and NVIDIA over at Audi at the link below.