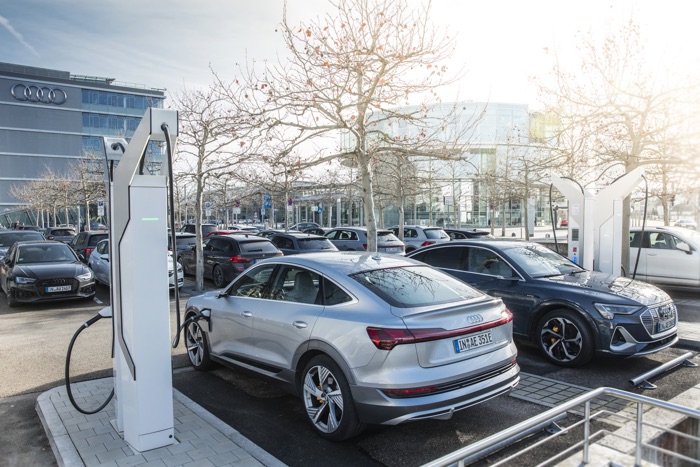 Audi has big plans for electric vehicles and now the company has announced that it is investing 100 million euros in electric charging at its own sites.

The company will create more than 4,500 electric charging points and these will be at Audi’s own sites like its main production plant and others.

Audi is setting up more than 4,500 charging points for battery-operated vehicles, thereby contributing to the energy transition in private transport. “Establishing such extensive charging infrastructure is a completely new challenge,” Maximilian Huber describes his task. The project manager for site charging is not only in charge of building the charging points but also the energy manager and software provider for the comprehensive charging solution at the automotive manufacturer’s sites. At the main plant in Ingolstadt alone, there will be 3,500 charging points available in the final development. There will be 1,000 charging points in Neckarsulm, just under 100 in Brussels and Győr. Likewise, charging infrastructure will be built at the factory in San José Chiapa. The company already offers expansive charging capacities at the training centers at Munich Airport. The entire project has a total budget of up to EUR 100 million.

A charging concept on this scale is unique in Germany so far – and requires meticulous preparation and largely independent energy management. A separate project team has therefore been preparing and structuring the concept for the implementation since the middle of 2017. The fundamental decision to electrify ten percent of all parking spaces was already made a year earlier. “Such lead times are necessary because the planning and expansion of the energy supply on this scale alone takes multiple years,” explains Huber. Carrying out the setup during ongoing production at the locations is a particular challenge.

You can find out more information about Audi’s plans to bring electric vehicle charging points to its sites in Europe at the link below.