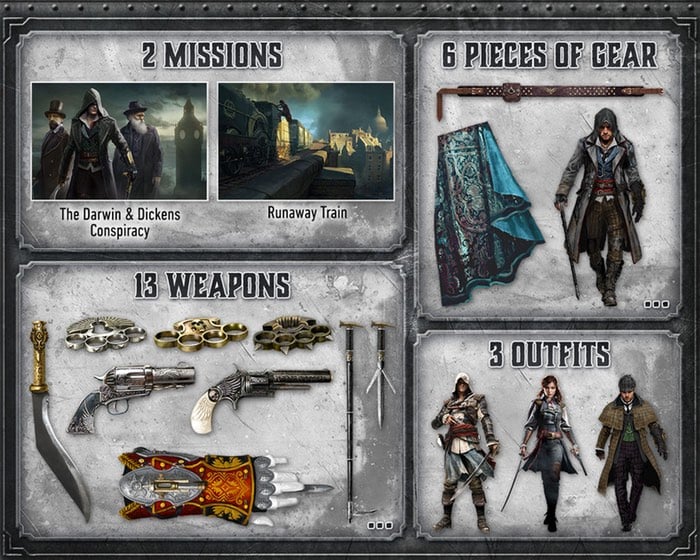 A new DLC has been released today for the Assassin’s Creed Syndicate game in the form of the new Streets of London Pack, which is available to purchase via Steam priced at £5.49.

The Streets of London Pack provides an extra 45 minutes of gameplay and contains missions, weapons and gear to expand your Assassin’s Creed Syndicate game seven further.

Starting with The Darwin and Dickens Conspiracy Missions: Embark on two pulse-pounding missions that will take you into the inner sanctums of London’s most influential men. Defend Charles Darwin’s discoveries from those who would kill to silence him. And help the friend of legendary writer Charles Dickens, keep a secret that could get him killed.

This pack also includes the Runaway Train Mission: as a runaway train thunders through London at top speed, you must find and fix the train’s critical flaws before you run out of time. This mission offers 15 minutes of gameplay. Finally, this pack comes with a variety of equipment & weapons for both Jacob & Evie: 13 weapons, 6 pieces of gear and 3 outfits. If you have obtained exclusive content through pre-order offers or collector’s editions, you might already own part of the content of this pack.

Jump over to the Valve Steam games network to purchase the Streets of London Pack DLC now.