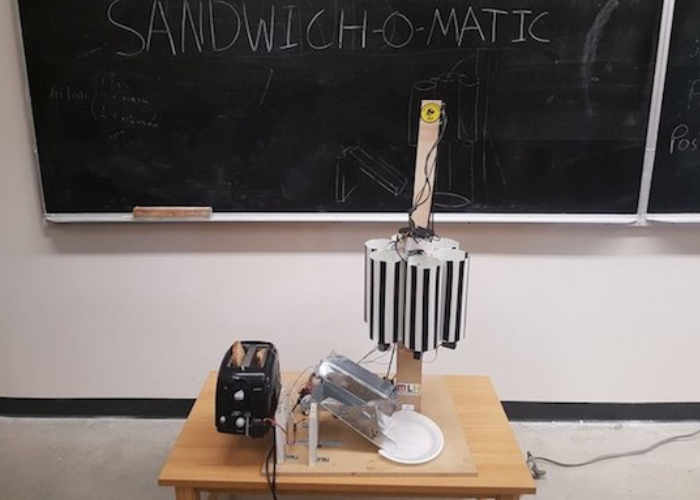 Arduino enthusiasts searching for a new project to keep them busy over the holiday season, may be interested in a new sandwich making machine called the Sandwich-o-Matic, which has been created by a small team of developers and makers during a thirty-six hour hackathon.

The team consisting of Clive Chan, Colin Daly, Alex Foley and Wilson Wu have used a little Arduino hardware and programming together with a toaster and other components to create a rotating dispenser which is controlled by servos, to help create the perfect sandwich making machine.

Check out the demonstration videos below to learn more about the Sandwich-o-Matic that accepts both voice and NFC commands for sandwiches.

Why waste time making food, when you can just get something else to cook for you? Sandwich-o-matic originated from an idea of a toaster that butters your toast for you. We explored the idea, and took it a step further by building a voice controlled sandwich maker. Sandwich-o-matic is a fully automated, voice controlled sandwich making machine. Simply tap the “begin recording” button on the site, and tell the machine your order (for example, “please make me a sandwich with pepper and sausage”). The machine will construct the sandwich from scratch, right before your eyes!!

Sandwich-o-matic was an ambitious idea for a thirty-six hour hackathon. We spent a lot of time planning the design for functionality (e.g. the spinning disks under each topping chamber), and even more time building the parts. We used Servos for all of the moving parts except for the DC motor that pulls the toaster sideways, all of which are controlled by the combination of a Photon and an Arduino. The back-end is node, hosted on AWS. We used the Google Cloud Platform for voice to text features.

For more information on the new Sandwich-o-Matic jump over to the Dev Post website for details by following the link below.