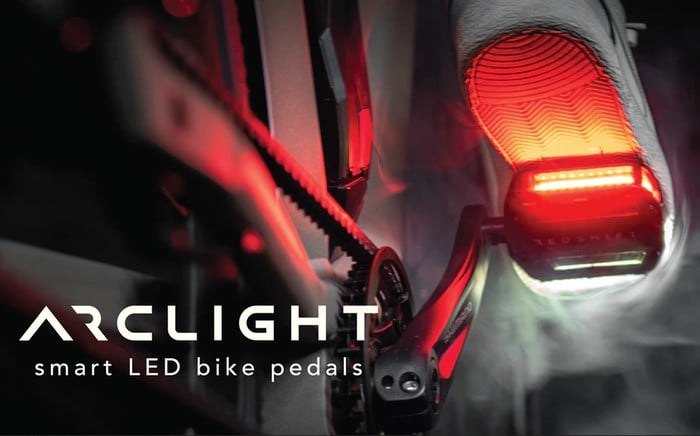 Increasing your visibility when cycling on busy roads at night is always advisable and the Arclight illuminated LED bike pedals provide an easy way to add 57% more visibility to your bike say its creators. Using bio-motion technology and modular lights that automatically turn on and off as you start pedaling to conserve battery power. The Arclight rugged waterproof bicycle pedals is currently in its final days on Kickstarter and has already raised more than $300,000 thanks to nearly 3,000 backers.

Increase your visibility while riding with LED bike pedals

Backer early bird pledges are now available for the unique project from roughly $29 or £39 (depending on current exchange rates), offering a considerable discount of approximately 31% off the final retail price, while the Kickstarter crowd funding is under way.

“The unmistakable circular movement of the Arclight Pedals attracts the attention of motorists and pedestrians – instantly identifying you as a cyclist. Scientific studies performed by Clemson University and others show that adding bio-motion (motion that is associated with the natural movement of the human body) increases visibility by up to 57% compared to standard front/rear lights.”

If the Arclight campaign successfully raises its required pledge goal and the project completion progresses smoothly, worldwide shipping is expected to take place sometime around February 2022. To learn more about the Arclight illuminated bike pedals project checkout the promotional video below.

“Standard bike lights are often difficult to distinguish from car lights, traffic lights, and building lights. The dynamic motion of the Arclight Pedals creates a unique visual signature, cutting through the visual clutter to maximize visibility and safety. Standard bike lights are typically visible only from directly behind or in front of the bicycle; with limited visibility from the sides. The wraparound design of the Arclight LED modules illuminates every angle – providing 360° of protection.”

“Staying visible is the best way to keep yourself safe on the bike. The Arclight Pedals amplify your biological motion making you up to 57% more visible than standard bike lights. Powerful LEDs and long lasting rechargeable batteries ensure you will stand out and stay safe even on your longest ride. Arclight’s SmartSet sensors turn the lights on automatically when you start riding, and turn off automatically when you park your bike. They’re on when you need them and off when you don’t.”

For a complete list of all available early bird specials, stretch goals, extra media and technical specifications for the illuminated bike pedals, jump over to the official Arclight crowd funding campaign page by following the link below.