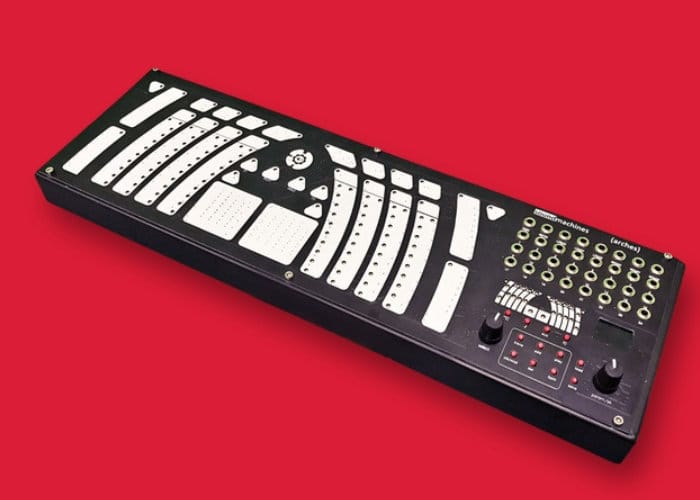 Artinoise based in Italy has created a new universal interface which has been specifically designed to provide a tactile centrepiece for your modular or hybrid electronic music production and performance set up. Watch the demonstration video below to learn more about the (arches) sound machine. “Blending inspiration, power and ease of use, we created the perfect evolution of the concept of tactile controller. Built on the foundation of our first class touch interfaces (LS1lightstrip and LP1lightplane), found today on thousands of eurorack systems around the world, we designed a beautiful work of art and technology.”

(arches) is a powerful user interface capable of interacting with many instruments and systems thanks to its 30+ CV/GATE outputs and full MIDI connectivity via DIN, USB and wireless MIDI over Bluetooth. The tactile universal interface has this week launched by a Kickstarter and already raised over half its required pledge goal with still 28 days remaining on its campaign. If successful sound machines will start shipping out to backers during July 2018 and the universal interface is available to back with pledges starting from €750 or £655.

Soundmachines know-how in capacitive touch control surface is unparalleled in eurorack. With thousands of LS1lightstrips and LP1lightplanes in the market, is the name to consider when talking about reliable, simple and flawless touch CV generators/recorders. Following customer’s requests and nurturing interest for integrated, easy to use and alternative control interfaces, we came up with a series of ideas that adapted our robust technology to earlier concepts developed by the fathers of the modular synthesizers. The key target was the design and implementation of a carefully conceived product with the maximum attention to usability, highest possible degree of functionalities and an affordable pricing.

For full specifications and a list of all available pledges jump over to the official Kickstarter campaign page by following the link below.