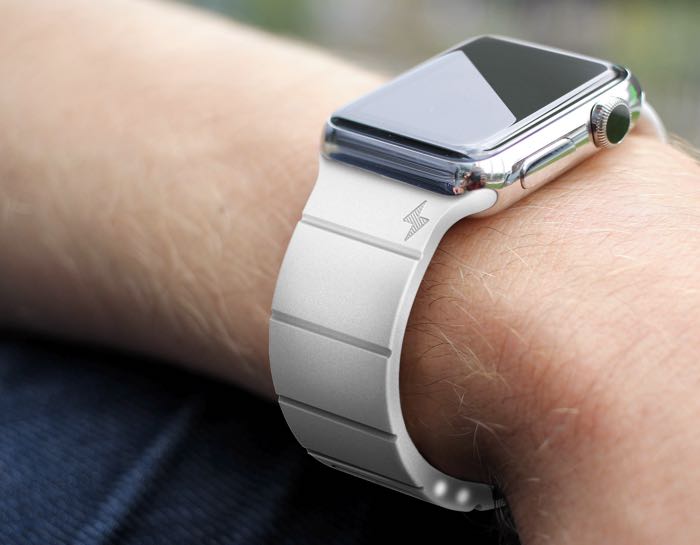 Some of our readers might remember or have even supported the unique and useful Apple Watch Reserve Strap which was specifically designed to provide extra battery power to then newly launched Apple Watch.

The Apple Watch Reserve Strap was available to preorder from March 2015 and was capable of providing up to 150 percent extra battery life for the Apple Watch. Unfortunately it has been announced this week that Apple has restricted access to the port that the strap requires to charge the Watch.

Forcing the company creating the Reserve Strap to put orders on hold until Apple decides it would like to allow access and launch an official MFi program for Watch. The creators of the battery strap explain more over on their website.

In the last two months we’ve been engaged in constant discussion with Apple in regards to Reserve Strap and we wanted to give you a full rundown of its implications on the future of our products.

Beginning with WatchOS 2.0.1 an unexpected change to the Apple External Accessory Protocol disabled the functionality of Reserve Strap. Until this change, Reserve Strap functioned perfectly–extending the battery life of Apple Watch by over 150% in many cases allowing users to keep their Watch charged for up to a week.

Specifically, this bug interferes with the communication between accessories and Apple Watch. For the time being, Apple has suspended use of this port until they unveil an official MFi program for Watch. In keeping with their wishes we will be suspending shipment of orders to customers with updated Watches until Apple officially supports development of smartbands.

Though for customers who have already placed pre-orders and will not be updating their Watches to OS 2.0.1 or later, we will ship Reserve Straps as planned in the coming weeks.

An interesting development that further enforces our expectations for an official Apple smartband program is this recently published Apple patent application titled “Modular Functional Band Links for Wearable Devices”. Of particular interest is paragraph [0039] which references the modular links each having a unique identifier and serial number for authentication with the host. This method is identical to the way accessories for iPhone and iPad communicate through the Lightning port (of which the Apple Watch Accessory Port is based on).

We would greatly appreciate if you would contact Apple in support of Reserve Strap and an official smartband MFi program. You can either send an email to the Apple Hardware Evangelism team here or submit feedback on Apple’s website.

Let’s hope that Apple has a change of heart and re-enables access to the required port for the Apple Watch Reserve Strap to once again be a viable accessory. As always we will keep you updated on news about the story as it happens.