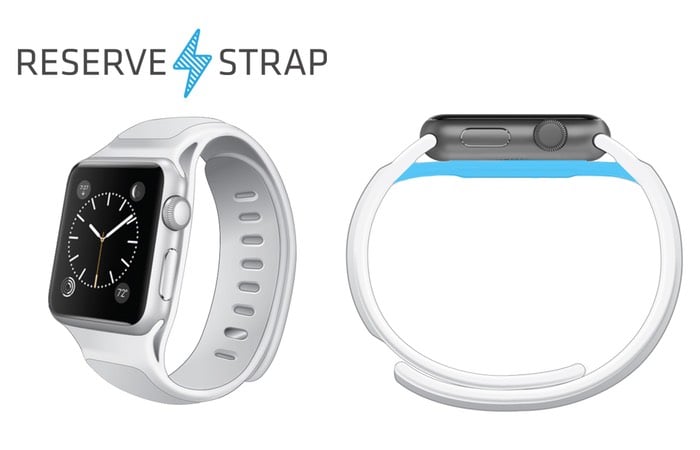 If you are considering purchasing the Apple Watch when it launches on April 24th, 2015 but are a little worried about the battery life of the wearable smartwatch that is expected to provide around 18 hours of use before requiring a charge.

A new concept Apple Watch accessory called the Reserve Strap might be worth more investigation and has been designed to charge your Apple Watch while you wear it. Check out the video below to learn more.

The Reserve Strap is currently available to pre-order directly from the official website and will soon be launching on the Kickstarter crowdfunding campaign website to raise the required funds to move from a concept into production. Its creators explain in more.

“The Apple Watch won’t be released until late April but that hasn’t kept us from creating a solution for what we see as potentially its biggest flaw–a battery life of less than one day.

The Reserve Strap is our solution to this issue. We’re waiting with rapt attention until we can get our hands on the real thing and continuing to design and develop the first and only on-wrist charger for the Apple Watch.

These photos show our first concept–a silicon band with embedded lithium polymer cells and an inductive charging cradle between your wrist and the Apple Watch. Through prototyping, we’ve refined this design and come up with a few other ways to charge the Watch that we can’t wait to share with you.

In the mean time, we’ve begun accepting pre-orders for eager early adopters as a way to gauge market interest. We’re still working through pricing and release details but will post updates soon. If you’re still on the fence, sign up for our newsletter and follow us on Twitter or like us on Facebook.”

As soon as the Apple Watch Reserve Strap launches on the Kickstarter crowdfunding website and more information is released about its specifications including how much more juice it will be able to add to an Apple Watch battery via its charging process, we will keep you updated as always.