I’m not the sort of person who cares much for birds. I’ve never owned one, but I do know someone who does and it drives me nuts tweeting and screeching constantly. A guy named Andrew Gray has a parrot that freaks out in screeches and squalls every time he leaves the room. 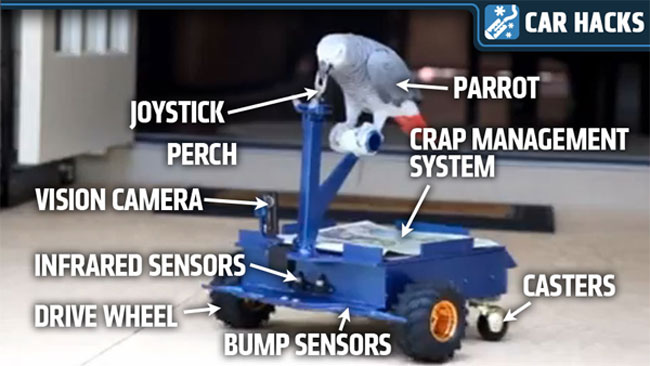 The man apparently tried to stop the bird from squealing constantly by devising a system that would squirt it with water if it squawked. When that didn’t work, he simply built the bird its own car allowing it to follow him around the house. This may be the most awesome use of a parrot in history.

We don’t have all the details on the remote-controlled vehicle the man built, but I suspect it’s heavily based on the robotic vacuum cleaners on the market. It has two larger drive wheels in the front, bump sensors, infrared sensors, and a vision camera allowing the bot to see where it’s going. The robot will also automatically return to its charging dock when it needs to recharge no matter how the bird feels about it. The bird is able to control the car using a tiny little joystick it can grasp with its beak.