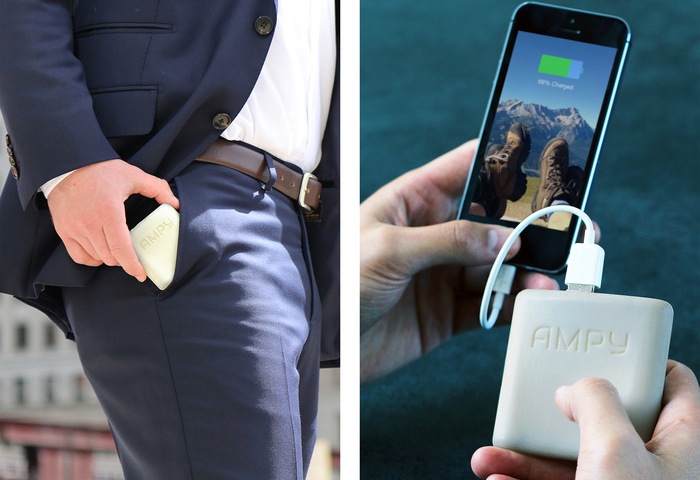 Carrying a portable battery is a great way to keep your mobile devices topped up with a little more juice whilst away from the grid. But if you are like me sometimes that battery is not always fully charged and ready.

A new motion charger battery called the AMPY is hoping to help solve this problem by using your body’s motion though out the day to charge the battery. Ampy has been created by a team of developers and designers based in Chicago within the US.

The AMPY project is currently over on the Kickstarter crowd funding website looking to raise $100,000 pledges to start production. For more information on the new AMPY motion charger battery check out the video below. Its creators explain more :

“AMPY is a wearable device that captures energy from your motion, turning it into power to charge your phone or any USB-powered device. AMPY captures your kinetic energy when you move and stores it, so you can recharge your smartphone when you need it the most.

“AMPY charges iPhones, Android phones, and any other USB-powered device. AMPY stores the energy you generate in the internal lithium ion battery. Simply plug in your smartphone or wearable device into the USB port to start charging. In a hurry? We engineered AMPY to charge your devices just as fast as a wall outlet.

AMPY’s internal battery stores about a week’s worth of physical activity and stays ready to use for months. You can also recharge AMPY from a wall outlet if needed using the micro-USB port on top.”

So if you think AMPY is something you could benefit from, visit the Kickstarter website now to make a pledge and help AMPY become a reality with backer pledges starting from $75.