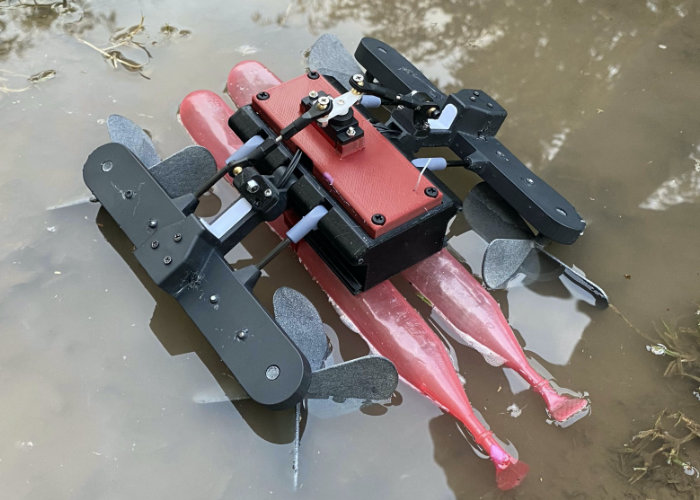 A new amphibious robot has been developed by a team at Israel’s Ben-Gurion University of the Negev building on previous designs are also inspired by nature providing a robot that is capable of running across the surface of water. The “palm-sized” AmphiSTAR retains the outrigger-like spreadable arms, which are now equipped with a total of four paddle-bladed propellers, two on the underside of each arm.

“When moving across surfaces such as grass or gravel, the arms are angled so that the propeller blades function like the RSTAR’s rimless spoked wheels, digging in and pulling the robot forward. This configuration allows it to crawl at a maximum speed of 3.6 meters per second (11.8 ft/s).

Upon reaching a body of water, it continues to use the propellers, which are now angled to let it “run on the water” at up to 1.5 m/s (4.9 ft/s). That said, it can also move across the water in a slower more boat-like fashion, with a pair of buoyancy tanks keeping it afloat. Future plans include giving it the ability to swim underwater.”

To learn more about the Amphibious STAR high speed amphibious robot capable of crawling over land and hovering over water jump over to the Ben-Gurion University of the Negev.