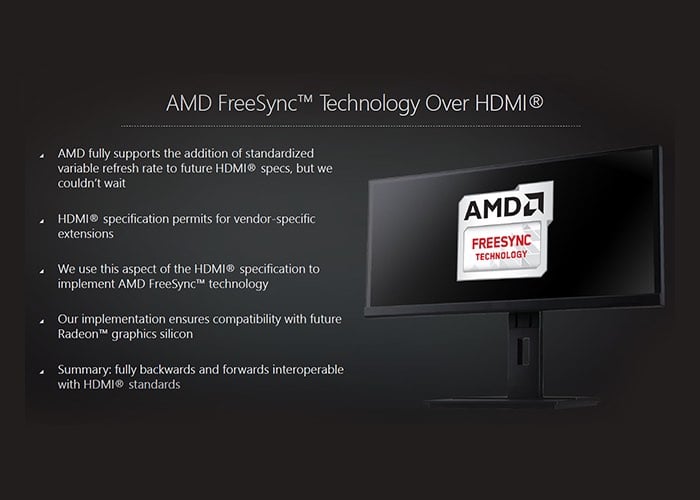 During a technology summit this week AMD has announced that the company will be rolling out its AMD FreeSync adaptive frame-rate technology to HDMI connections in the near future.

Back in June of this year the AMD FreeSync over HDMI technology was demonstrated at the Computex trade show in Taipei, Taiwan and will provide a more affordable way to be able to use the AMD FreeSync which until the HDMI adoption was only available via a monitor equipped with a DisplayPort.

AMD also announced that the Lenovo Y700 will be the very first laptop to feature its FreeSync technology. The Hexus website explains a little more about the new AMD FreeSync Over HDMI technology asn what we can expect as it rolls out worldwide.

Variable frame-rate technology over HDMI hasn’t been implemented thus far because the HDMI specification doesn’t support it inherently, unlike DisplayPort’s (1.2a) adherence to VESA’s adaptive sync. So getting FreeSync or, indeed, G-Sync to work over HDMI requires additional work for both the technology provider and scaler manufacturer.

HDMI does allow for additional extensions to be introduced to the specification and this is the method by which FreeSync is introduced. AMD says that it is including specific, proprietary extensions that introduce the necessary variable frame-rate technology. Though it wouldn’t be drawn into exactly what these extensions are and whether Nvidia could do the same – licensed from AMD or built from the ground-up – having cheaper monitors open to the technology can only be a good thing.

Jump over to the AMD website to learn more about FreeSync and how it can help improve choppy gameplay, broken frames and general viewing. If you enjoy building Raspberry Pi projects this awesome Raspberry Pi HDMI input add-on might be worth more investigation.