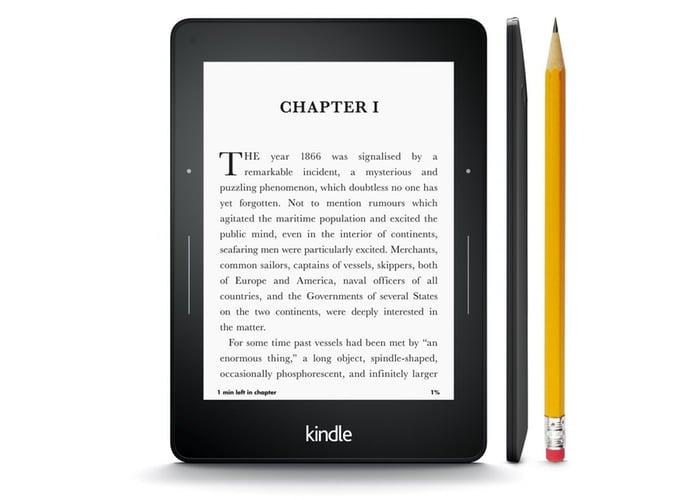 Following on from the leaked information yesterday which revealed Amazon’s new Kindle Voyage E-Reader device ahead of any official announcement by the company.

Amazon later in the day officially launched their new flagship Kindle Voyage for $199, together with an updated Kindle device that is priced at $79.

The new 7th generation Kindle in the form of the Kindle Voyage is Amazon’s most advanced e-reader and sports a new design, with a flush glass front combined with a magnesium back. Providing the Kindle with a casing that measures 7.6mm thick and a device weighs less than 6.4 ounces.

The New Kindle Voyage is fitted with a new Paperwhite display, offering users the highest resolution, highest contrast, and highest brightness of any Kindle. With 300 pixels per inch and specially strengthen, scratch proof glass.

The Kindle Voyage is also available with free 3G, supported in 100 countries around the world. The 3G connection is paid for by Amazon, so users have no monthly fees to pay or annual contracts. Jeff Bezos, Amazon.com Founder and CEO explained in the press release :

“Our mission with Kindle is to make the device disappear, so you can lose yourself in the author’s world,”-“Kindle Voyage is the next big step in this mission. With the thinnest design, highest resolution and highest contrast display, reimagined page turns, and all of the features that readers love about Kindle—books in seconds, no eyestrain or glare, readability in bright sunlight, and battery life measured in weeks, not hours—Kindle Voyage is crafted from the ground up for readers.”

The other new Amazon E-Reader will replace the lowest priced Kindle device and is now equipped with a touchscreen display, a 20 percent faster processor and is priced at $79.

Both new Amazon Kindle devices are now available to preorder and shipping will start sometime next month. For more information on the new Amazon Kindle Voyage jump over to the Amazon press release website for details.