Apple iPad 5 has seen its fair share of rumors in the past few weeks. We’ve seen the tablet getting leaked in detailed images, showing us a thinner iPad that borrows the looks of the iPad Mini. Now, some schematics have been leaked that reveals the dimensions of the upcoming iPad 5. 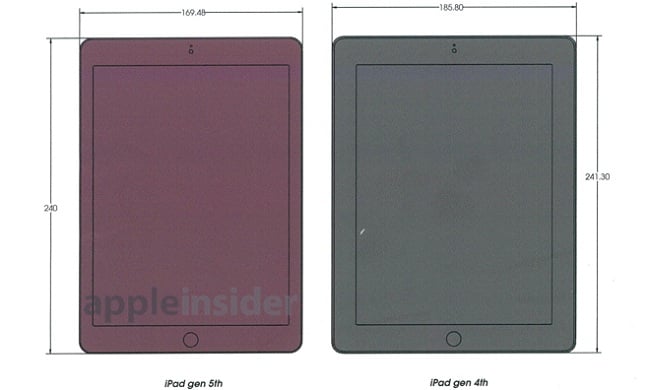 The folks at AppleInsider managed to get hold of some documents that show what case makers expect Apple’s upcoming iPad will look like, so that they can get their products ready before Apple unveils its refreshed iPad 5. As seen before, the document shows that fifth-generation iPad will be lighter with thinner side bezels compared to the earlier version.

The documents apparently show that the purported iPad 5 will measure 169.48mm compared to 185.80mm in the current iPad. The fifth-generation iPad also appears to be a little bit smaller in height and measures 240mm while the current one measure 241.3mm.

The next generation iPad also appears to be thinner than its predecessor, as seen in a number of leaked images and component parts. The document shows that iPad 5 thickness reduced from 9.55mm to 7.5mm.

Apple is rumored to hold an event next month where the company is expected to launch iPad 5 as well as iPad Mini 2 with retina display. Apple upcoming iPads are also expected to feature the fingerprint scanning technology similar to the current iPhone 5S. Rumors also suggest that Apple will follow the same color combination as the iPhone 5S – we’ve seen the leaked iPad panels in space gray in the past as well as some unofficial press renders.

We’ll keep our eyes on the news and will inform our readers if anything comes up.