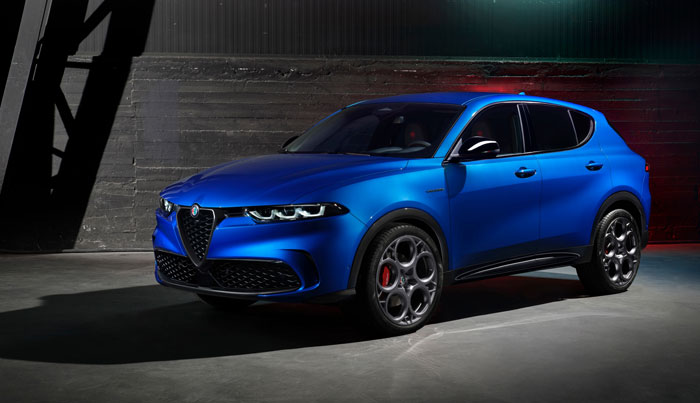 Alfa Romeo has revealed a new SUV called the Tonale globally. The SUV will be offered as a 2023 model and maintains what the automaker calls an unmistakable Italian design. It looks like the concept seen back in 2019 and is offered with two different powertrains.

One of the powertrains is the Tonale PHEV Q4 AWD that uses a six-speed automatic transmission with a 15.5-kWh lithium-ion battery, a 90 kW electric motor, and a 1.3-liter turbo four-cylinder. The combustion engine and electric propulsion provides a combined 272 horsepower and an electric range of over 30 miles.

The other powertrain is the Q4 AWD utilizing a 2.0-liter turbocharged four-cylinder. With a nine-speed automatic. It produces 256 horsepower and 295 pound-foot of torque. Both versions feature integrated driving applications providing three modes, including Dual power/Dynamic, Natural, and Advanced efficiency. Alfa will offer the Tonale in three models, including Sprint, Ti, and Veloce. Orders will begin in Q4 2022, with the first vehicle shipping in Q1 2023.