At least 100mg of caffeine high. No use beating around the bush pretending this is some sort of medicine though. The promotional literature itself states that a single cartridge of caffeine laden Aeroshot is equal to a Starbucks coffee and is ideal for night owls and neurotics. Oh, and people who work hard and need the energy boost. 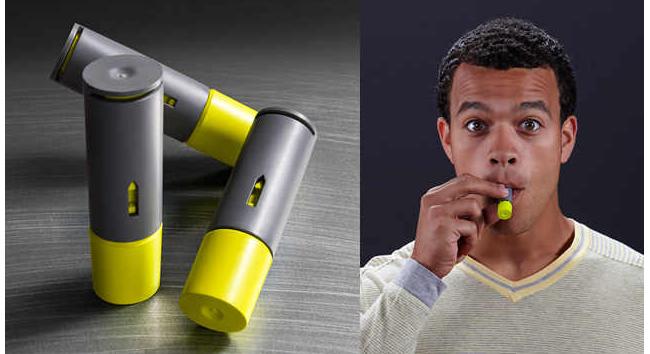 Individual Aeroshots come in neat gray-green capsule cartridges containing a ‘fine powder’ that’s ingested through the mouth. For the love of sanity, don’t snort this through your nosehole. Also, spare yourself a full dosage and only take it in a few puffs at a time.
If you’re wondering who in their right mind would come up with such a ludicrous new spin on caffeinated substances, why, it’s some Harvard professor/writer. Having done the necessary product explanation, it can’t be helped that the Aeroshot’s most marketable features brings to mind drug use and smoking. Come on, puffing energy powder?
Uncomfortable thoughts aside, Aeroshots have the benefit of a solid holistic marketing campaign behind it. It’s sleek, futuristic, and rather novel. Would you give it a try?