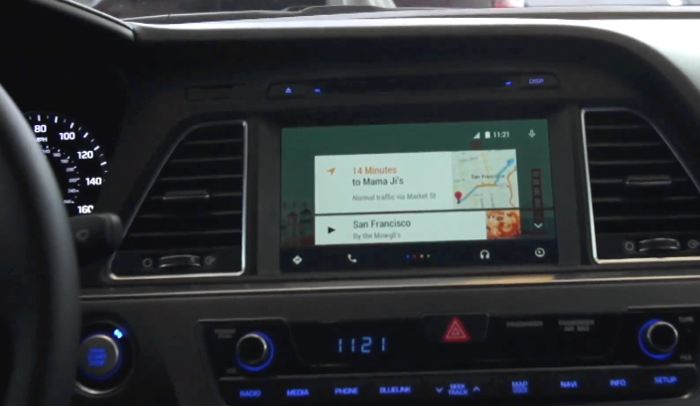 Yesterday we heard about Google’s new Android Auto, which will bring connected Android devices to your car, and now we have a video showing the platform in action.

The video below shows some of the features of Android Auto running in a Hyundai, the platform can be controlled with voice commands and also built in controls which are located on the steering wheel.

Google has teamed up with around 28 car makers for the launch of Android Auto, this includes some premium brands like Maserati, Bentley, Audi and Alfa Romeo, as well as a range of other vehicle manufacturers.

Android Auto comes with a range of features which include turn by turn navigation with Google Maps, the ability to play music from your smartphone or from your various music apps on your Android device.

It also comes with voice search, so you can search for say an address using voice search, and then get directions to that address on your in car display.

We can expect to see the first Android Auto equipped cars launching later in the year, Audi announced yesterday that it would be launching its vehicles with the system build in in early 2015.

The platform certainly does look interesting, and we are looking forward to seeing it when it launches in a number of vehicles later in the year.

Apple also recently launched their in car system called CarPlay, they have also teamed up with a range of auto makers, including the like of BMW.

We would love to hear from our readers on what they think of both systems, would the addition of one of these systems influence what make of car you would buy in the future? Leave a comment and let us know.