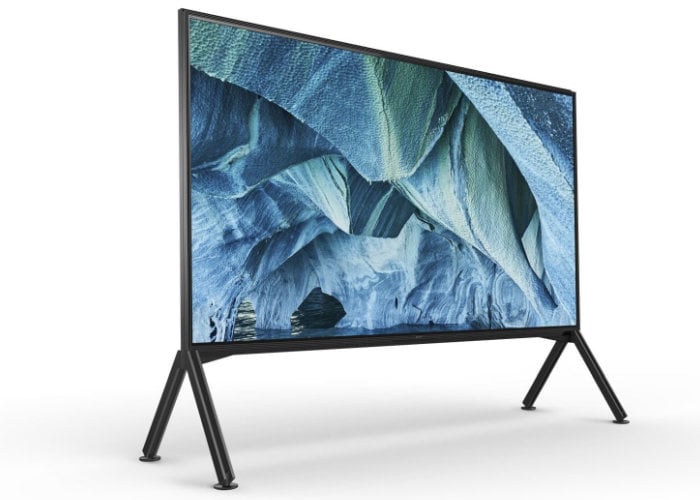 If you have plenty of money to burn and are looking for a new 8K TV you may be interested in the latest Sony 8K TV which measures a staggering 98 inches and costs a further staggering $70,000. Sony is gearing up to launch their new 2019 TV range and have unveiled the Master Series Z9G with prices starting from just $13,000 for an 85-inch model.

Sony is expected to launch the new Master Series range during June 2019 and will also offer more affordable 4K TVs in the form of the Master Series A9G OLED line with prices starting from $3,500 for the 55 inch version, or $8,000 for the 77 inch edition. Over 8 million self-illuminating pixels are “precisely and individually controlled” by Sony’s Picture Processor X1 Ultimate.

“In addition to the processor, the A9G has Pixel Contrast Booster for more colour and contrast in bright areas. As a result, the A9G provides premium picture quality showing images and colours as they truly are, and as the creator intended. The MASTER Series A9G also features Netflix Calibrated Mode1 and IMAX Enhanced with DTS audio to further ensure that content is delivered as intended and supports Dolby Vision and Dolby Atmos. Complementing the picture with an immersive sound experience, Sony’s Acoustic Surface Audio+ technology creates sound from the entire screen, providing pictures and sound in perfect harmony. Additionally, Apple AirPlay 2 and HomeKit support will launch in the A9G series later this year.”

“Sony MASTER Series Z9G 8K HDR TV: To better meet consumer demand for larger TVs, Sony is introducing extra resolution with its first consumer 8K television in the Z9G TV, exclusively powered by our acclaimed X1 Ultimate processor. Optimised to handle the 33 million pixels of 8K, this processor plays a vital role in delivering the high-quality picture in the MASTER Series family. The Picture Processor X1 Ultimate has a unique algorithm specially developed for 8K that can detect and analyse each object in the picture. Coupled with new intelligent technologies like Backlight Master Drive with full-array local dimming, and 8K X-tended Dynamic Range PRO, the Z9G’s super-large picture is matched with exceptional detail and accuracy for a stunning 8K viewing experience. Additionally, the Z9G series will have support for Apple AirPlay 2 and HomeKit later this year.”