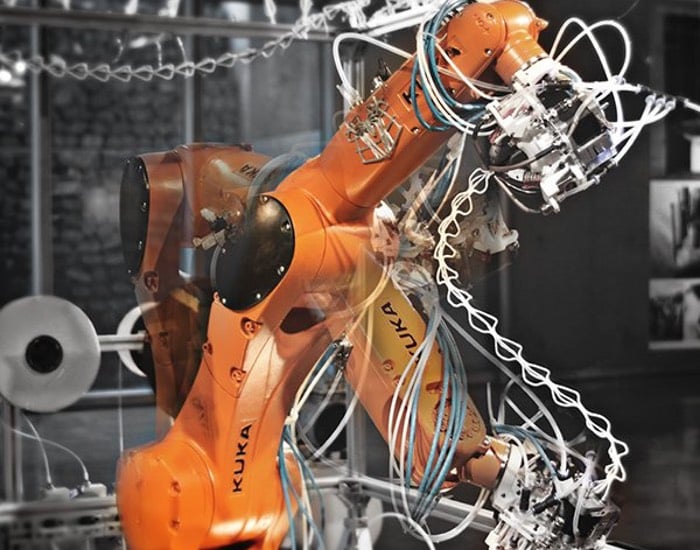 There are plenty of 3 axis 3D printers available to purchase on the market at the current time, but a glimpse of next-generation 3d printing technology as been unveiled in the form of a 6-Axis Robotic 3D printer, that has been unveiled and created by students at the College of Architecture and Urban Planning at Tongji University.

The 6-Axis Robotic 3D printer has been inspired by spiderwebs and created by a team under the direction of project instructor Yu Lei from Tsinghua, workshop leader Philip F. Yuan from Tongji and has been named the Robotic 3D Spatial Printer.

Factories only require technology showing capabilities in making things; but designers must arm themselves with technology that perform smart strategies outside the scope of replacing human labor.”

“In the project of Robotic 6-Axis 3D Printing, we developed a fabrication strategy learning and emulating the law of nature (referring to Chinese philosophy “师法自然 “). By studying the material and structure performance of 3D form in nature, we figured out a way to incorporate biomimetic fabrication strategy into 3D printing process. And by designing the special robotic-end effector (Tooling) and utilizing the great flexibility and accuracy of KUKA robotics, the biomimetic fabricating process has been fully realized.”

For more information on the new 6-Axis Robotic 3D printer jump over to the 3D Print website for details via the link below.