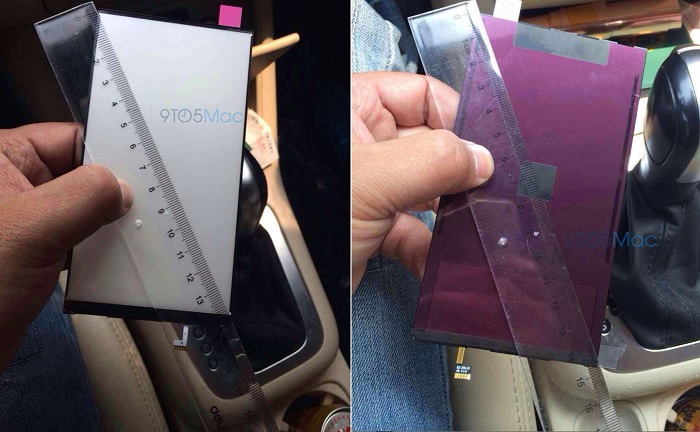 Apple is said to be working on two new iPhone 6 which will see the light of the day later this fall. One of them carries a screen size of 4.7-inch while the other one will feature a 5.5-inch phablet sized display.

Recently, some images of the 5.5-inch iPhone 6 display parts made their way to the internet. The images surfaced from 9to5Mac, which shows a LCD display panel, along with a ruler which diagonally measures the screen size to be 14 cm (almost 5.5-inch).

9to5Mac says that images were sent to them by none other than Sonny Dickson, the same guy who was behind a handful of leaks related to the iPhone 5C, 5S and other Apple products. So, there you go, we have a reason to believe it may be the real deal, but still we’ll suggest our readers to take it with a grain of salt.

The upcoming 5.5-inch iPhone 6 is said to come with sapphire glass display, with A8 processor and improved camera, as well as iOS 8 as its operating system. Rumors suggest the larger iPhone will be in limited supply, and may launch a few weeks after the 4.7-inch version.

There’s no word from Apple, and there won’t be until the device is officially announced. Rumors suggest we may see the alleged iPhone 6 in September. Stay tuned, we’ll update you if any other information comes up.