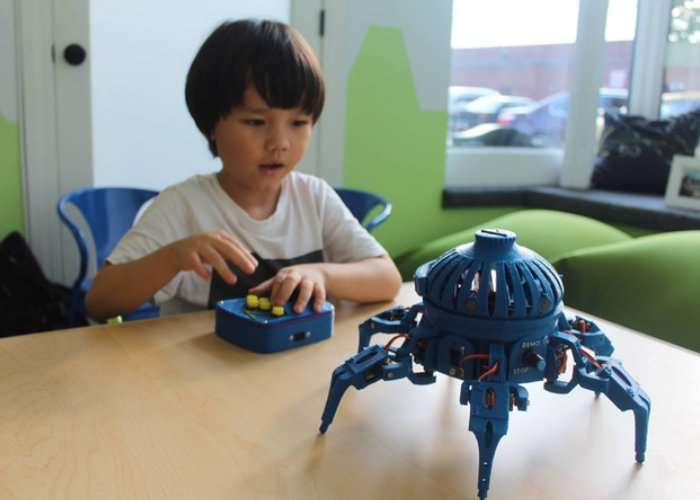 Vorpal is an affordable, open source, wireless 3D printed scratch programmable hexapod robot has this week been launched via Kickstarter with the aim of raising $18,000 over the next 33 days.

Watch the demonstration video to learn more about the five legged robot which has been specifically designed for education, designing games and most of all fun.

The Vorpal Combat Hexapod is a 3D-printed, Bluetooth-controlled, Open Source, low cost educational robot. It uses the Scratch drag-and-drop programming language developed by MIT (and already used by many schools).  It’s made from standard Arduino hardware and other open source or commonly available components. We provide the Vorpal Combat Hexapod both in kit form and fully assembled and tested! In kit form, you can either 3D print the parts yourself, or get the Full Kit which includes all 3D printed parts.

You can maneuver the Vorpal Combat Hexapod using its included 3D printed gamepad which can trigger 60 different motions useful in many different activities. The gamepad has an SD card and can even record motions and replay them. Even better: you can write Scratch programs to create your own custom hexapod motions and upload them onto gamepad buttons for use in games and activities! There’s no other hexapod that has this kind of sophisticated yet easy-to-use functionality.

The fact that the structural parts are entirely 3D printed means Makers and schools with access to 3D printers can save a lot of money by just purchasing the Basic Kit, which has everything they need (such as motors, electronics) other than the 3D printed parts and batteries. This makes the Vorpal Combat Hexapod just about the least expensive wireless hexapod kit on the planet, especially considering the amazing features this robot has!

Jump over to the official Kickstarter campaign page via the link below for more details and to make a pledge from $99 for early bird backers, with shipping expected to take place during November 2017.