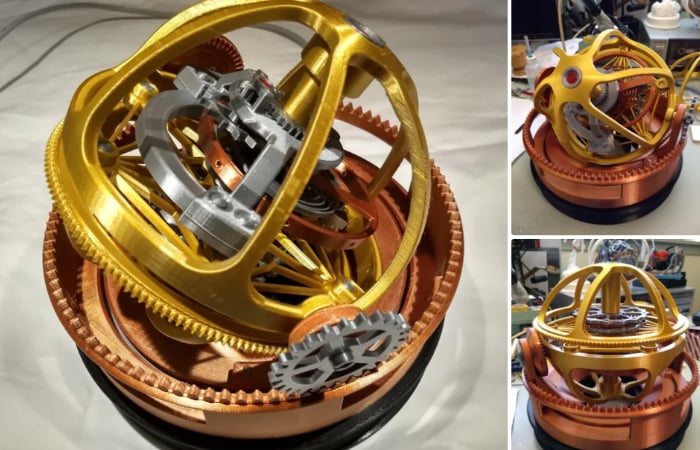 3D printing enthusiasts looking for a new project to keep their 3D printers busy for the next few days, may be interested in a 3D printed tourbillon inspired by the Jacob & Co’s Twin Turbo Furious watch, which is equipped with dual spinning orbs called tourbillons to increase the watch’s timekeeping accuracy. Check out the video below to learn more about the project created by Instructables member Mcmaven.

“Here is my third experiment at modeling a tourbillon. This one is based on a Jacob and Co. Twin Turbo Furious watch. It still needs some more work to get it to run a little smoother and more reliably, but I hope to post it to Thingiverse within the next couple or weeks.”

“I tried to make the model an accurate (scaled up) version of the original Furious mechanism. I printed the screws to scale and used them as caps to cover the 2mm screws that actually hold it together. In looking at the videos of this design, there mechanism with a spring between two plates (shown below). I’m don’t know what its original intent was, but I’m using it to decouple the intermittent rotation of the movement (you can see the balance spring below the trellis) from the constant rotation generated by the stepper motor.

Without it the L2 spherical frame would jerk with every tick. The spring and the lower silver plate attach to the movement assembly. The end of the spring is attached to the upper silver plate with that Philips head screw, which is driven by the motor. And there is a pin below the screw that sticks into the slot in the lower plate. In the picture the assembly is at rest, so the spring has pulled the pin to the right end of the slot in the lower plate.”