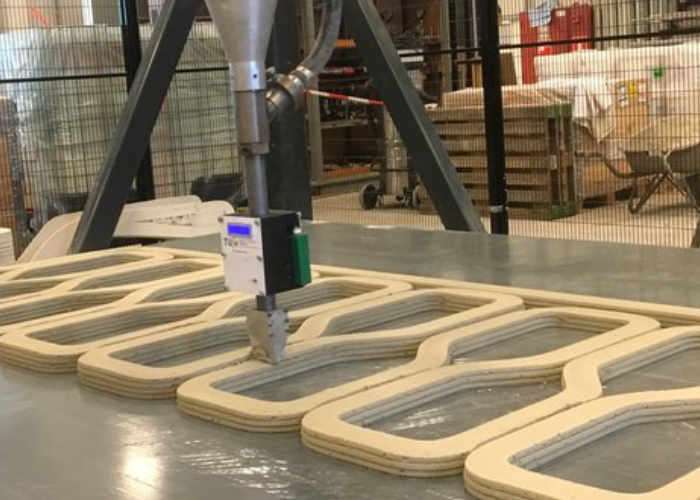 Researchers at the Eindhoven University of Technology in the Netherlands have released details this week of a new 3D printed reinforced concrete bridge they are currently creating.

The research team explained more about its inspiration and construction:

One of the advantages of printing a bridge is that much less concrete is needed than in the conventional technique in which a mold is filled. By contrast, a printer deposits only the concrete where it is needed. This has benefits since in the production of cement a lot of CO2 is released and much less of this is needed for printed concrete. Another benefit lies in freedom of form: the printer can make any desired shape, and no wooden molding frames are needed.

An extra detail is that the researchers in the group of Theo Salet, professor of concrete construction, have succeeded in developing a process to also print the steel reinforcement at the same time. When laying a strip of concrete the concrete printer adds a steel cable so that the bridge is ‘pre-stressed’ so that no tensile stress can occur in the concrete, because this is something that concrete is not able to cope with adequately.

In recent months Theo Salet’s research group made an initial scale model (1:2) and tested its safety by subjecting it to a 2000 kg load. Now that the safety has been demonstrated, a start can be made on printing the concrete elements that will later be glued together to form a bridge. Provincial representative Christophe van der Maat today got the ball rolling at TU/e.

It is expected that the bridge elements will be printed and ready within two months. In September the BAM construction company will put the bridge in place in the Noord-Om, a new section of ring road around the village of Gemert, where the company is also using other new innovative building techniques. Others involved in the project are engineering firm Witteveen + Bos, the Province of Noord-Brabant, the municipality of Gemert-Bakel, Saint-Gobain Weber Beamix B.V., Dywidag-Systems International BV, Verhoeven Timmerfabriek and NV Bekaert SA.