If you are looking for a 3D printer you might be interested in a new creation called the 3D Peachy Printer which has launched on Kickstarter this month and already blasted past its pledge goal.

The 3D Peachy Printer is available to purchase for around $100 and has been designed to be an affordable, small, lightweight, and unique 3D printer in a class all it’s own. Watch the video after the jump to learn more about the 3D Peachy Printer project and see it in action. 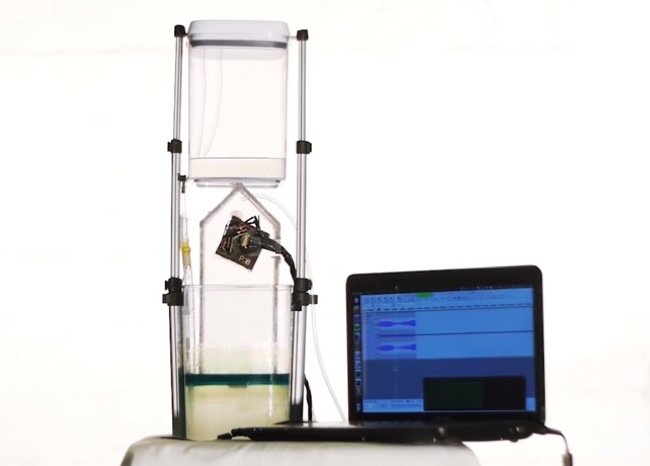 “The peachy printer is a Photolithographic printer. That means it uses a controlled beam of light to cure light sensitive resin into hard objects. The peachy moves a laser beam along the X and Y axes to create the shape of the object, while using a drip system to control the level of the resin on the Z axis which determines the height of the object.

The object you want to print must first become a 3D model in Blender. The software we wrote as an add on to blender takes the data from that 3D model and translates it into an audio waveform. It then plays the audio file out to the printer through the headphone jack in your computer. This waveform drives a pair of electro magnetic mirrors. The higher the volume, the higher the voltage, the more the mirrors move. The purpose of these mirrors is to reflect and control the path of the laser beam. By using the audio waveform generated from the 3D model data to drive the mirrors, we are able to get the laser beam to draw out the shape of the object. That’s takes care of the X and Y axes.

Now let’s talk about the drip system that creates movement on the Z axis. The salt water in the top container syphons down to a drip feed. The rate of this drip feed is controlled by a valve. As each drip leaves the feed, it passes through two contact points creating an electrical connection that is detected by your computers microphone jack. The drip continues to fall into the bottom container where it causes the resin floating atop it to rise. The software listens to the microphone level, counting each drip that falls and calculates the resultant level of the resin. This allows the software to send the layer that corresponds with the current Z-level of the resin. This process continues until the print is complete!”