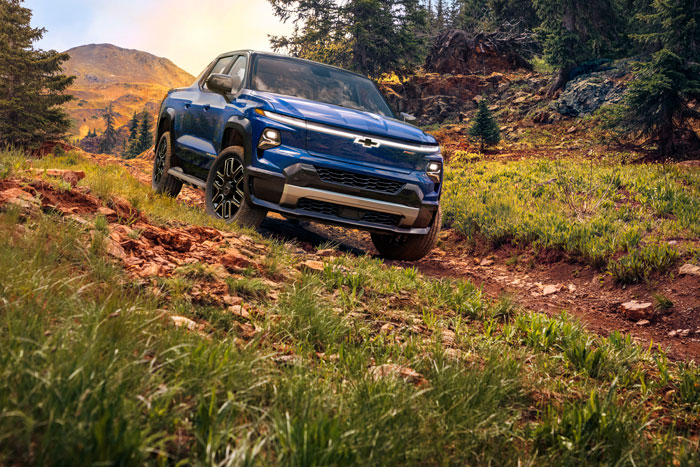 It doesn’t take a genius to know that Chevy and other brands would be close behind once Ford revealed the F-150 Lightning electric pickup. Chevy has now revealed the 2024 Silverado EV. The electric truck aims for an estimated driving range of 400 miles per charge on both Silverado EV Work Truck and RST models.

Chevy’s electric pickup will have up to 664 horsepower and over 780 pound-foot of torque. That power level will be available on RST models with the available max power Wind Open Watts Mode. RST models in that mode are estimated to reach 60 mph in under 4.5 seconds.

Both versions of the electric Silverado will support DC fast charging at up to 350kW as standard. Options will allow both models to have up to 10.2kW of offboard power. RST models will be able tow up to 10,000 pounds and have up to 1300 pounds of payload capacity. WT models will feature 510 horsepower and 615 pound-foot of torque with 8000 pounds of towing and 1200 pounds payload. Chevy also plans a fleet model able to tow up to 20,000 pounds when properly equipped.