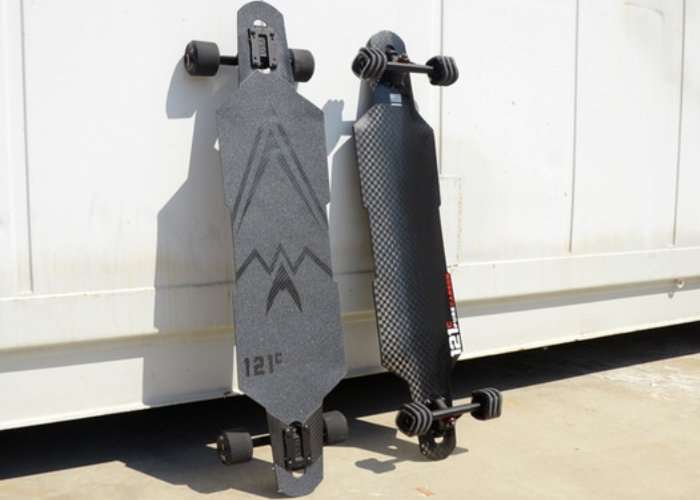 Ryan Olliges and 121C as taken to Kickstarter once again to raise the required funds to create is new range of longboard skateboards which are constructed from upcycled spacecraft carbon fiber.

Watch the video below to learn more about this unique way to use the waste carbon fibre from old spacecrafts which is then optimised for the “ultimate carving experience”.

Our mission at 121C is to eliminate the carbon fiber scrap problem for the commercial spaceflight industry. They contribute a large portion of the over 10 million pounds of carbon fiber that is landfilled each year. Ever since we started our goal was, and still is, to deliver the coolest and most advanced carbon fiber skateboards, while also doing something good for the environment and our future.

We launched our first board, the Aileron, on Kickstarter in the summer of 2015. It was the first board made entirely from material that was discarded from the production lines of modern spacecraft and rockets. The following year we launched the Rover, a smaller, more portable board, yet super durable.

The Afterburner is a 38.9 inch, twin-tip longboard with a 28.5 inch wheelbase. It has wheel to wheel camber and drop through mounts for a lower stance and more stable ride with responsive turning. Both the carbon fiber and the resin system used in the boards is unlike anything else available. It is literally the same material used in the structures of modern rockets and spacecraft as it is upcycled from those production lines. The layup used in this board ensures that there is the necessary amount of lateral and torsional strength.

For more information jump over to the official Kickstarter campaign page by following the link below where longboards decks are available to buy from $125.