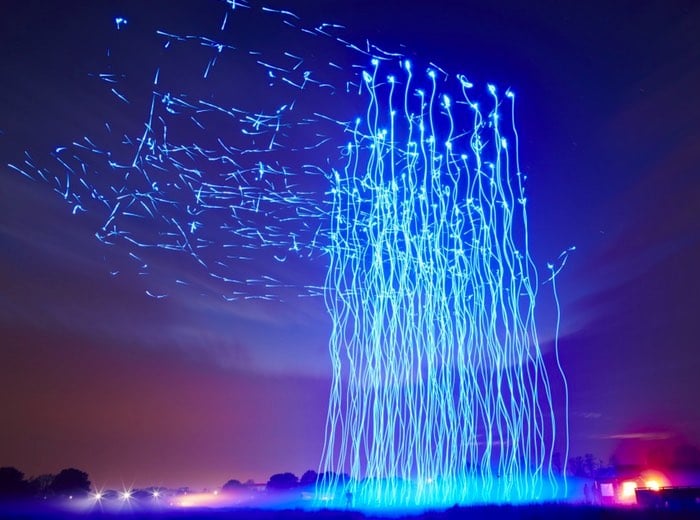 Intel has taken it upon themselves to acquit 100 Drones with LED lights and program them to carry out a wide variety of in-flight manoeuvres to create a fantastic drone light show which is also set a new world record.

Dubbed Drone 100, the show has set an official world record Guinness World Record for most UAVs airborne simultaneously and the video was first shown during Krzanich’s CES 2016 keynote.
In the video below Intel and Ars Electronica FutureLab explain how they developed Drone 100 to create a “3D masterpiece of art and airborne technology, using Intel technology to push the boundaries of what’s possible”, says Intel who write on their website

The goal for Intel was to combine curiosity with innovation to show what’s possible for UAVs, said Nanduri’s Intel teammate Natalie Cheung. “We’re working with aviation entities to understand what the policies are, the rules and regulations, and make sure that drones are safe so we can have light shows like this,” said Cheung. “We can work together on different goals to make sure that it’s safe.”

In November, Nanduri led the first drone demonstration inside the U.S. Capitol during a visit to influence progressive safety policies for UAVs. “Regulatory bodies have real issues and concerns, but how do we ensure that we as an industry help solve these problems by working with agencies like FAA and NASA,” Nanduri said, who ultimately wants standard, worldwide regulations.

Visit the official Intel website for more details on Drone 100 via the link below.