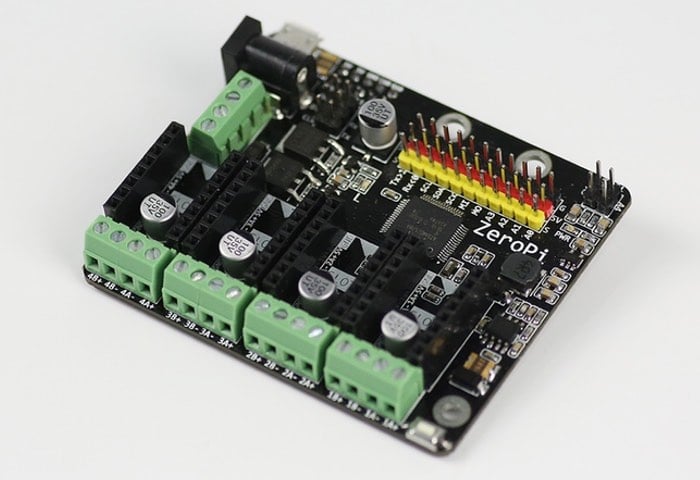 Makers and developers that enjoy using both the Raspberry Pi and Arduino platforms to create projects may be interested in a new development kit that has been created by the ZeroPi Team.

ZeroPi is a new system and development board that is Arduino Zero compatible and has been specifically designed for robotic motion structure systems.

The ZeroPi is equipped with a Atmel SAMD21J18, 32-bit ARM Cortex M0+ as the MCU, which is fully compatible with the official Arduino Zero, Raspberry Pi and more. Watch the video below to learn about this new development kit that has launched over on the Kickstarter crowdfunding website looking to raise $5,000. Its developers explain a little more :

ZeroPi can be applied to all kinds of application scenes such as 3D printer, CNC, tracked mobile robot and etc. ZeroPi has specially designed the M4 holes in order to perfectly compatible with Makeblock Aluminum mechanical parts to support open-source hardware or robotic projects.

For more information on the new ZeroPi jump over to the Kickstarter website for details via the link below and make a pledge from just $29 to be one of the first to be able to get your hands on the new development kit. If you found this article interesting you might also be interested in this list of awesome Raspberry Pi Zero projects we have put together. Or why not build your very own Arduino wind speed meter or anemometer to record the wind speed in your area.