Yamaha has developed a new style of keyboard which has been created to also sing. The new Yamaha Vocaloid Keyboard is equipped with a extra set of 16 keys which can be used to control consonants, vowels, and the two types of voicing marks. 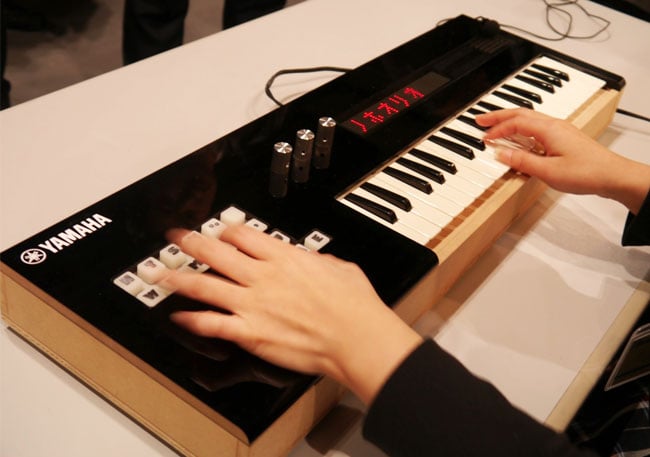 For the moment Yamaha have no plans to launch the new Vocaloid Keyboard commercially, but the sound chip can be removed and there are possibilities for Yamaha to provide the technology to other companies in the future. Yamaha explains:

“Until now, with Vocaloid, you made up tunes on a PC, by entering each note separately. But with this new version, you can perform in real time. Firstly, you decide on the sound, which is pronounced using consonants and vowels. For example, if you want to pronounce the syllable “ga,” you press K and the dakuten voicing mark. This method differs from entering Japanese using the Roman alphabet. To reduce the number of buttons needed, there are buttons for the two types of voicing marks.”

“People who compose using the Vocaloid can’t give live Vocaloid performances yet. I think they have to simply replay sounds. But with this system, users can perform live in real time. Also, we know from interviews that some users have bought DAW software, but find it hard to use. Lots of those people are able to play a keyboard, though. So, we’d like to offer such people an easier way of using Vocaloid, where you can produce sounds just by pressing keys.”