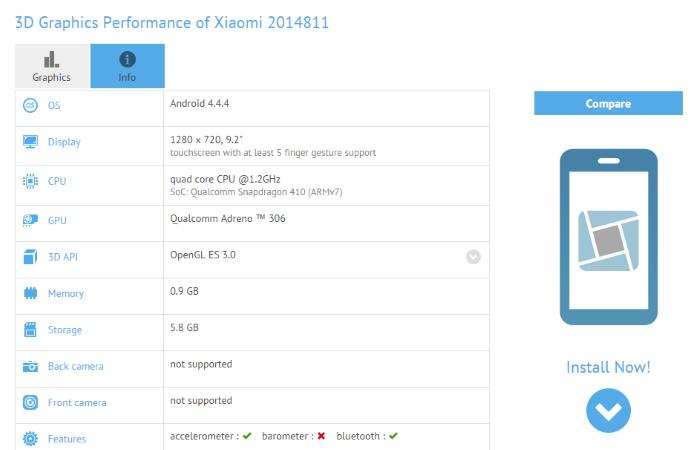 Xiaomi is gaining a lot of traction in emerging markets, and has managed to grab a considerable market share, especially in China. It seems the Chinese OEM may launch a budget-friendly tablet in the coming weeks.

Recently, an alleged tablet from Xiaomi was spotted on GFXBench website, boasting a 9.2-inch display with a 1280 by 720 resolution.

The listing on GFXBench doesn’t reveal the complete specifications of the tablet, but some of the most important ones are present. It’s expected to come with a quad-core Snapdragon 410 64-bit processor clocked at 1.2GHz, Adreno 306 GPU, 1GB of RAM, and almost 8GB of internal storage, out of which 5.8GB would be accessible to the user.

The details about the front and back camera are not available at the moment, but the basic sensors are present on the tablet, and it will also feature a SIM card slot. There’s no official word from Xiaomi about the existence of any such tablet, but we’ll find out more as days pass by.

We’ll update you as soon as we get any information about the upcoming tablet from Xiaomi.