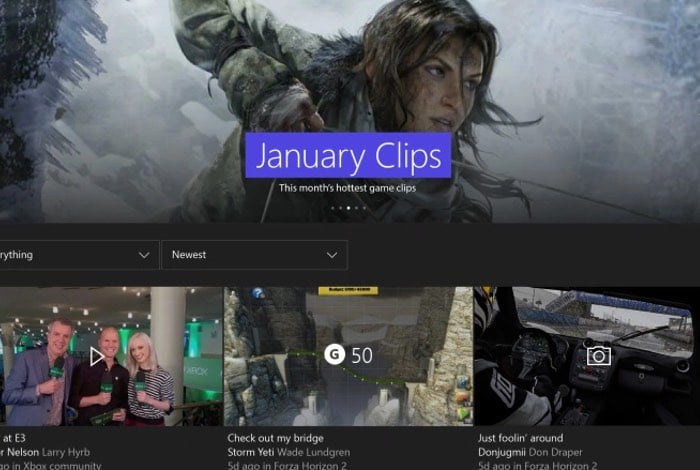 Microsoft more details about the new features you can expect to enjoy via the Xbox One Preview and also whilst using the Xbox Beta application this month.

Details of all the new features have been published to the Major Nelson website and will be rolled out to Xbox One Preview program members from today onwards. New features include : See who’s in a Party, Gamerscore Leaderboard, Re-arrange Pins on Home and access them offline, Updating Activity Feed in Xbox One, Joinable Twitch Broadcasts and more.

Mike Ybarra from the Xbox and Windows Gaming Platform team Explains more about what you can expect :

Brand new experiences and updates which will start to rollout to Xbox One Preview:

Re-arrange Pins on Home and access them offline: Many of you have told us that you want Pins on your Xbox One Home to be easier to organize. In Preview, you will now be able to rearrange individual pins. We also made Pins accessible for launching when you are offline.

Updating Activity Feed in Xbox One: Your activity feed in Xbox One Preview will inform you when there are new items in your feed. Clicking the link will take you to the top of your feed where you’ll see a run-down of the newest posts, so that you always have the freshest content at your fingertips.

Joinable Twitch Broadcasts: You want it to be easier to watch your friend’s game broadcasts. In Preview, Game Hubs as well as the game tile will allow you to easily launch Twitch.tv broadcasts if friends are broadcasting.

Improvements to Suggested Friends: Looking for people who you might know on Xbox or top content creators to follow? Check out the new Friend Suggestions area in Community and the Friends list in the Guide on Xbox One. Friend Suggestions include the gamertag, real name (if shared), gamerpic or Xbox Avatar image, and the reason the suggestion was made to you. Click through from the suggestion to view the member’s full profile and choose to grow your friends list.

Hide games from ‘ready-to-install’ list: Fans asked that we re-enable the ability to hide content like betas, trials, games, and apps that they no longer want to install. Xbox One Preview members will be able to start using this feature again.

Updates coming to Xbox One Preview and the Xbox Beta app that make gaming on any platform better:

Avatar Store: Equip your avatar with the latest avatar items in the newly-integrated ‘Avatar Store’. On the console, the Store is built right into the Xbox Avatars app and on Windows 10 PCs and phones, access the Store through the Xbox Avatars app. Get access to the entire catalog of new and oldie-but-goodie items, including free items. As you’re perusing catalogs, enjoy the ability to preview the items on your avatar real-time before you buy.

Xbox News: Xbox News is a one-stop source for all the latest information about new hardware, console updates, game releases, tournaments like the Halo World Championship, breaking entertainment content, and more. This month, both Xbox Beta app and Xbox One Preview audiences will see Xbox News posts in their activity feed to make it easier to stay up to date on all things Xbox.

Improvements to Trending: Across Xbox One Preview and Xbox Beta app experiences this month for console and Windows 10 PCs and phones, you’ll notice a new access point for Trending items to the right of the Community tab on your console and in the left menu area of the Xbox app. This gets you to a dedicated Trending landing page with the most popular topics across Xbox Live surfaced at the top followed by an inspirational assortment of top videos, screenshots, achievements, and more that members across the community have created or unlocked. Consider friending or following publishers of content that you like.

Suggested friends: In both the Xbox One Preview and Xbox Beta app, we’re making it easier to get details on your suggested friends. Starting this month, if you click ‘see all’ or double tap on the shortlist of friend suggestions in any scenario, you will be pointed to a full-screen view of all suggested friends.

Across both Xbox One Preview and the Xbox Beta app, January brings the injection of Trending topics and friend suggestions into your activity feed.

Compact mode for Xbox App: With this update to the Xbox Beta app, we’ve moved additional functions to compact mode which will enable you to quickly switch between your friends’ view, your party, messages and activity alerts. A quick click allows you to keep an eye on what your friends are up to, while multi-tasking on your Windows PC!