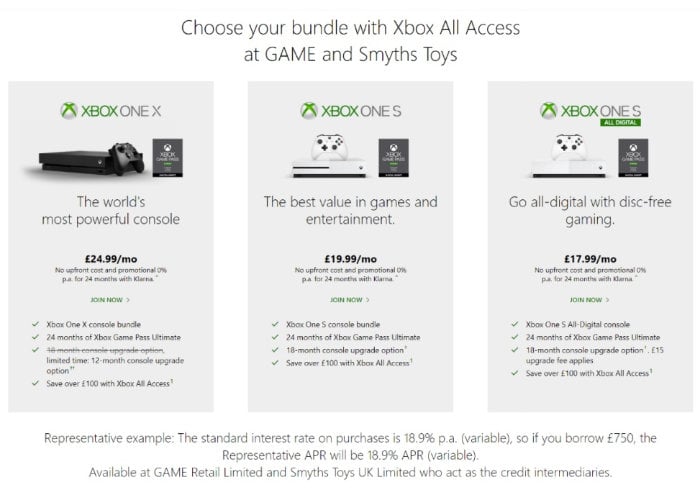 If you are considering upgrading to the next Xbox console launching in time for the holiday season of 2020, you may be interested in a new upgrade option unveiled by Microsoft this week the form of Xbox All Access. The new upgrade programme allows you to purchase an Xbox One for as low as £17.99 for 24 month with plenty of options available for different versions and bundles including Xbox One X, Xbox One S or Xbox One S All-Digital Edition. The Xbox One X has a 12-month upgrade option, whereas the Xbox One S has an 18-month upgrade option. It’s also worth remembering that pricing for the Xbox Project Scarlett console has not even been confirmed by Microsoft at the current time.

Microsoft has also bundled a 24-month membership to Xbox Game Pass Ultimate subscription as well as including one Xbox controller. The new subscription package will be launched throughout the United States on November 8th, 2019 and will be arriving in the United Kingdom on November 5th, 2019 and will be available throughout Australia tomorrow October 29th, 2019 onwards. Microsoft explained “We realise buying a console is an investment and some players are waiting to make the jump to the next generation with Project Scarlett when it launches in Holiday 2020 alongside Halo Infinite,”

The Eurogamer website explains a little more about what you need to do to upgrade to the new Xbox Project Scarlet.

“To upgrade to the next Xbox, you need to buy it with a new Xbox All Access purchase from the same shop where you joined the program and trade-in the console you originally bought with Xbox All Access (Microsoft said the console you’re returning needs to be in good condition). Oh, and you’ll have to be “in good standing” with Swedish bank Klarna, the financing partner Microsoft has gone with in the UK, to get Project Scarlett on credit.”

You also need to be aware of a £15 upgrade fee players upgrading from the Xbox One S All-Digital Edition to Project Scarlett.