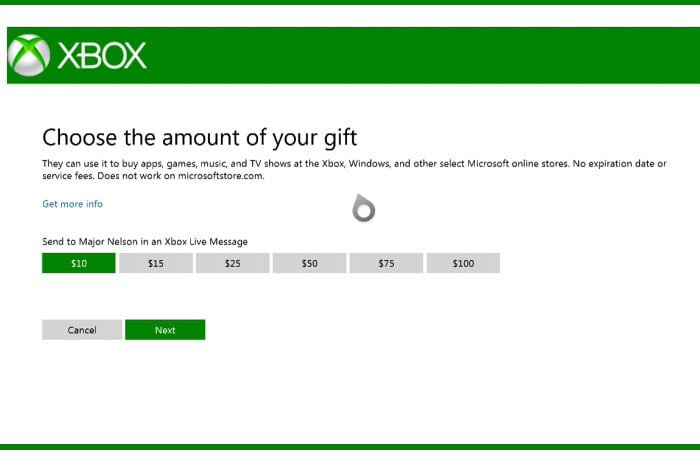 Major Nelson has today announced that Xbox Digital Gift Cards can now be sent by Xbox 360 Preview members thanks to a new updated that has been rolled out by Microsoft for the Xbox system.

The new Xbox Digital Gift Cards range in value from $10 up to $100 and can easily be sent to other Xbox Preview Members, allowing them to buy applications, games, music and TV shows directly from the Xbox console.

Microsoft explains more over on the Major Nelson website :

You can send a gift from the Social twist or the Xbox Guide by selecting the profile of the person you want to gift to and then selecting ‘Send Gift’. You will be asked for a gift amount and have an opportunity to confirm the purchase. The gift will be delivered as a token in an Xbox Live message and can be redeemed by the recipient by simply selecting “Redeem Code”.

The Xbox 360 Digital Gift Cards have no expiration date or service fees and unfortunately will not work on the Microsoft Store website. Also to learn more about waht you can expect to enjoy via the Xbox platform this week and in the near future check out this weeks episode of This Week on Xbox.